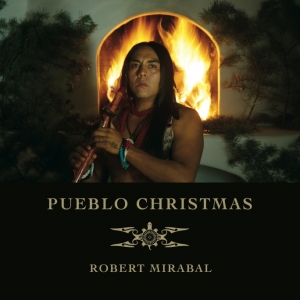 Green Chili Christmas: A contemporary song celebrating the Southwest Pueblos during the winter months. Originally a poem set to music

Christmas Eve: Originally a poem about an old Taos Pueblo man who returns to the Christmas Eve celebration after being gone for many years.

Origins of some of the most treasured and timeless holiday classics, the time periods they were written in and what was going on in the world during that time were extensively researched. The research resulted in bringing new life to classic Christmas carols with new arrangements using an array of Native flutes, tribal percussions and a cello. Pueblo Christmas was recorded within the majestic sacred mountains of Taos Pueblo, New Mexico. We simply call it "The Wonder of Robert Mirabal"

People ask me why I’ve made a Christmas album after all the struggles between Indigenous People and Christianity, says Mirabal. My answer is I needed to address the contradictions. Our Native religion is based on Nature, and is a 24/7, 365-day spiritual concept, but then there is a Catholic church on the corner.

For many Americans, Christmas is a time when they become conscious of their spirituality, and I wanted to connect our cultures at this special time. No matter what the politics were like when these songs were first heard, the music was created to fill the listener with love, hope and joy. They show that beauty can go beyond conflict to a place where music is the hero.

As you listen, remember that many of these songs became popular during the 19th century, a time of great change in America. This wasn’t the music of the governments and armies, but the popular music of the people, beautiful, uplifting and inspiring.

Robert Mirabal is a two-time GRAMMY Award winning artist and six-time Native American Music Award winner who lives with his family at the foot of the sacred Taos Mountains in northern New Mexico where he maintains a traditional life, keeping the centuries-old customs of the Taos Pueblo people.

Robert Mirabal’s many albums of traditional music, rock and roll, and spoken word present contemporary views of American Indian life that is unequaled. A leading proponent of world music, Robert has merged his indigenous American sound with those of Africa, Asia and Australia, tapping into a planetary pulse with a style that defies categorization.

"In the Blood" one of his more recent albums has won multiple awards including "Best International Album" at the Canadian Aboriginal Music Awards. Mirabal has been a featured performer with the New York-based classical string quartet ETHEL at the Brooklyn Academy of Music’s NEXT WAVE festival.

In 2009, Robert appeared as Tony Luhan (Taos Pueblo), the famed husband of Mable Dodge Lujan, in the movie Georgia O'Keeffe, a retrospective film about the artist. The movie premiered on the LIFETIME Television Network. His first novel Running Alone in Photographs is hailed as a contemporary Catcher in the Rye meets Bury My Heart at Wounded Knee.

Mirabal's one-man show "Po'Pay Speaks" premiered in Sante Fe, New Mexico to rave reviews. "Po'Pay Speaks", reflects the leader of the Pueblo Revolt in 1680 and is considered another groundbreaking and educational work by Mirabal.

Be sure to include "Pueblo Christmas' in your 2013 Holiday Season. It makes a for a great stocking stuffer also.