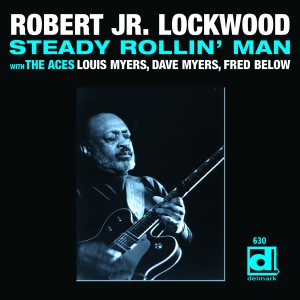 Robert Jr. Lockwood’s music shows the influence of not only his stepfather, Robert Johnson but also that of jazz guitarists Charlie Christian and Eddie Durham. By the mid-50’s he found himself in the enviable position of being THE studio guitar player in Chicago. He can be heard on classic blues songs like Little Walter’s “My Babe” and “Boom, Boom, Out Go The Lights”; Sonny Boy Williamson’s “Nine Below Zero” and “Eyesight To The Blind.” He also recorded with Muddy Waters, Otis Spann, Eddie Boyd, Willie Mabon, Sunnyland Slim, Roosevelt Sykes and others. This 1970 session was Robert’s first album as a leader!

Lockwood was born on a farm near Marvel, Arkansas in 1915. Once old enough to travel, Lockwood, like many promising bluesmen of the region, found himself drawn to Memphis. There he played solo along Beale Street and as Sonny Boy Williamson's original guitarist on what is reputed to be the world's first blues radio broadcast: "King Biscuit Time" on KFFA, Helena, Arkansas.

In the late '30s Lockwood moved to ST. Louis where he met and played with Dr. Clayton, the great African-born blues giant. Robert's recording debut was on a 1941 Dr. Clayton session done in Chicago for Bluebird. The same year he made his first recordings under his own name for Lester Melrose, also issued on Bluebird. Robert stayed in Chicago, although he often returned to Memphis and Arkansas, and by the mid-50s he found himself in the enviable position of being THE studio guitar player in Chicago. He can be heard on classic blues songs like Little Walter's "My Babe" and "Boom, Boom, Out Go The Lights"; Sonny Boy Williamson's "Nine Below Zero" and Eyesight To The Blind." He also recorded with Muddy Waters, Otis Spann, Eddie Boyd, Willie Mabon, Sunnyland Slim, Roosevelt Sykes and others. In 1960, Lockwood accompanied Otis Spann on the classic Candid sessions.

It was Sonny Boy who convinced Robert to move to Cleveland in 1961. they formed a band that played often at a tavern near 86th & Hough. When Sonny Boy left for Europe, Lockwood and his family remained in Cleveland. He stayed off the scene for a while spending more time as a family man.

Exciting performances at the 1972 Ann Arbor Blues Festival, in Toronto and at other festivals helped put Robert back into circulation. This 1970 session was Robert's first album as leader! There were three more Lockwood albums released around the same time (Contrasts and Robert Jr. Lockwood Does 12 on the Trix label and Blues Live in Japan on Advent).

Robert Jr. Lockwood stayed active on the international blues scene and resided in Cleveland until he passed away on November 21, 2006.

Wikipedia Biography
Early life
Lockwood was born in Turkey Scratch, Arkansas, a hamlet west of Helena.[4] He was one of two children born to Robert Lockwood Sr. and Esther Reese Lockwood,[3] later known as Estella Coleman.[5] He started playing the organ in his father's church at the age of eight. His parents divorced, and later the famous bluesman Robert Johnson lived with Lockwood's mother for 10 years off and on.[6] Lockwood learned from Johnson not only how to play guitar but also timing and stage presence. Because of his personal and professional association with Johnson, he became known as "Robert Junior" Lockwood, a nickname by which he was known among musicians for the rest of his life,[7] although he later frequently professed his dislike for this appellation.

Early career
By age 15, Lockwood was playing professionally at parties in the Helena area.[8] He often played with his quasi-stepfather Robert Johnson and with Sonny Boy Williamson II and Johnny Shines. Lockwood played at fish fries, in juke joints, and on street corners throughout the Mississippi Delta in the 1930s. On one occasion he played on one side of the Sunflower River while Johnson played on the other, with the people of Clarksdale, Mississippi, milling about the bridge, reportedly unable to tell which guitarist was the real Robert Johnson.[9]

Around 1937–1938 Lockwood worked with Williamson and Elmore James in the Delta, at places like Winona, Greenwood, and Greenville (where they most probably met Johnson, who died in 1938). Lockwood played with Williamson in the Clarksdale area in 1938 and 1939. He also played with Howlin' Wolf and others in Memphis, Tennessee, around 1938. From 1939 to 1940 he split his time playing in St. Louis, Missouri; Chicago; and Helena.[10]

On July 1, 1941, Lockwood made his first recordings, with Doctor Clayton, for the Bluebird label in Aurora, Illinois. On July 30 he recorded four songs, which were released as the first two 78-rpm singles under his own name: "Little Boy Blue" backed with "Take a Little Walk with Me" (Bluebird B-8820) and "I'm Gonna Train My Baby" backed with "Black Spider Blues" (Bluebird B-8877). These songs remained in his repertoire throughout his career.

In 1941, Lockwood and Williamson began their influential performances on the daily radio program King Biscuit Time on KFFA in Helena.[11] For several years in the early 1940s the pair played together in and around Helena and continued to be associated with King Biscuit Time. From about 1944 to 1949 Lockwood played in West Memphis, Arkansas; St. Louis; Chicago and Memphis.[10] He was an influence on B. B. King and played in King's band early in King's career in Memphis.

In 1950, Lockwood settled in Chicago.[12] A 1951 78-rpm single featured "I'm Gonna Dig Myself a Hole" backed with "Dust My Broom" (Mercury 8260), and a 1954 release contained "Aw Aw (Baby)" backed with "Sweet Woman (from Maine)" (J.O.B 1107). In 1954 he replaced Louis Myers as the guitarist in Little Walter's band. He played on Walter's number 1 hit "My Babe" in 1955. He left the band around 1957. In the late 1950s he recorded several sessions with Sonny Boy Williamson for Chess Records, sessions which also included Willie Dixon and Otis Spann. Lockwood also performed or recorded with Sunnyland Slim, Eddie Boyd, Roosevelt Sykes, J. B. Lenoir, and Muddy Waters, among others.

Lockwood in Knoxville, Tennessee, at the 1982 World's Fair
In 1960, Lockwood moved with Williamson to Cleveland, Ohio, where he resided for the second half of his life.[13] In the early 1960s, as Bob Lockwood Jr. and Combo, he had a regular gig at Loving's Grill, at 8426 Hough Avenue. From the 1970s through the 2000s, he performed regularly with his band the All Stars at numerous local venues, including Pirate's Cove, the Euclid Tavern, Peabody's, Flipside Tavern, Wilbert's, Brother's Lounge, and, in the last years of his career, Fat Fish Blue (on the corner of Prospect and Ontario in downtown Cleveland) every Wednesday night at 8 p.m. He played his regular three sets two days before the illness which led to his death. The All Stars continued the Wednesday residency for two years after his death.

His studio albums as a bandleader include Steady Rollin' Man, with the Aces (recorded 1970, Delmark); Contrasts (recorded 1973, Trix); ...Does 12 (recorded 1975, Trix); Hangin' On, with Johnny Shines (recorded 1979, Rounder); Mister Blues Is Back to Stay, with Shines (recorded 1980, Rounder); What's the Score (recorded 1990, Lockwood); and I Got to Find Me a Woman (recorded 1996, Verve). A 1972 45-rpm single included "Selfish Ways" backed with "Down Home Cookin'" (Big Star BB 020). Reviewing Does 12 in Christgau's Record Guide: Rock Albums of the Seventies (1981), Robert Christgau said, "Lovers of urban blues will cherish this record by Robert Johnson's self-designated heir. It even boasts some adventurously progressive saxophone and twelve-string stylings that do no violence to a notoriously intransigent genre. But Lockwood is an undistinguished vocal interpreter, and only one of his originals—the imperturbable 'Selfish Ways'—is worthy of interpretation itself."[14]

His solo guitar and vocal albums include Plays Robert and Robert (recorded 1982, Evidence), Delta Crossroads (recorded 2000, Telarc) and The Legend Live (recorded 2003, M.C.). A duet session with the pianist Otis Spann in 1960 resulted in Otis Spann Is the Blues and Walking the Blues, released by Candid.

At the age of 60, in 1975, he discovered the 12-string guitar and preferentially played it almost exclusively for the latter third of his life. His most famous 12-string was a blue instrument custom designed and made by the Japanese luthiers Moony Omote and Age Sumi. It was acquired by the Rock and Roll Hall of Fame Museum in February 2013 and is displayed there.

A live performance by Lockwood, Henry "Mule" Townsend, Joseph "Pinetop" Perkins, and David "Honeyboy" Edwards, recorded in 2004 and released in 2007 as Last of the Great Mississippi Delta Bluesmen: Live in Dallas, won a Grammy Award in 2008 in the category Best Traditional Blues Album. It was the first Grammy Award for Lockwood and Townsend.[15]

Lockwood died at the age of 91 in Cleveland, having suffered a cerebral aneurysm and a stroke. He is buried at Riverside Cemetery, in Cleveland.[18]