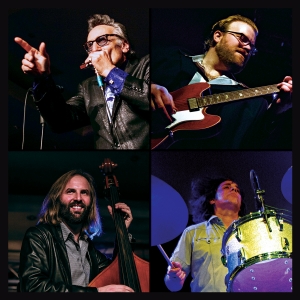 The first 13 tracks listed in the player
are from Rick Estrin & The Nightcats' 2014 release
You Asked For It...Live!

Every night that award-winning harmonica player, singer and songwriter Rick Estrin and his cohorts The Nightcats perform live— wherever in the world that may be—a crowd of dancing, shouting, laughing and cheering people will be enjoying some of the best live music they’ve ever heard. On one of these nights—October 5, 2013, at San Francisco’s Biscuits & Blues—the proceedings were captured live. The result is Rick Estrin & The Nightcats’ irresistible new release, You Asked For It...Live!. The band was, as they always are, on fire. The hometown, sell-out crowd was ready to explode, and the front man was celebrating his birthday. According to Estrin, “Cutting loose and stretching out in an intimate, nightclub-type setting is the natural environment for the Nightcats...The fact that it was my birthday, in the town where I was born and raised, only added more fuel to the fire.”

You Asked For It...Live! has the immediacy, feel and fun of a true Rick Estrin & The Nightcats performance. “No matter how much fun we have and how relaxed we can be in the studio, there’s still nothing like being in front of, and interacting with, our live audience,” Estrin says. The album features some of Rick Estrin’s best-loved and most-requested songs, dating back to his days as lead singer, songwriter and harmonica player of Little Charlie & The Nightcats (featuring Little Charlie Baty on guitar). The album is an up-to-the-minute and totally accessible slice of original, wry and witty blues with a simmering, funky rock edge fueled by Andersen’s blazing genre-hopping guitar and Farrell’s and Hansen’s dazzling keyboard and rhythm work. One listen makes it clear that this is a group comprised of four world-class musicians, who together form one of the tightest and most original bands in any genre.

Rick Estrin, who holds the 2013 Blues Music Award for Best Instrumentalist–Harmonica, is, according to the San Francisco Chronicle, “an amazing harmonica player, a soulful lead vocalist and a brilliant songwriter.” He ranks among the very best harp players, singers and songwriters in the blues world. His work on the reeds is deep in the tradition of harmonica masters Sonny Boy Williamson II and Little Walter Jacobs, while at the same time pushing that tradition forward with his unforgettable original songs. And his hipster, street-smart vocals are the perfect vehicle for driving those songs home. Blues Revue says, “Estrin has created some of the finest blues songs of any artist on the planet. His carefully wrought lyrics penetrate human weakness with the precision of a boxer, though more often than not, he chooses to leave you laughing after the blow’s been struck.”

Rick Estrin & The Nightcats— jaw-dropping guitarist Chris “Kid” Andersen, singing drummer (who plays standing up) J. Hansen and dynamic multi-instrumentalist Lorenzo Farrell (electric and acoustic bass, organ and Moog synthesizer)—serve up fresh and modern original blues injected with a solid dose of gritty roadhouse rock ‘n’ roll and Estrin’s trademark philosophical wiseguy humor. Since the 2009 release of their celebrated Alligator Records debut Twisted and the 2012 follow up One Wrong Turn, the band has toured non-stop, sharpening their musical telepathy to a razor’s edge.

Estrin won the 1994 Blues Music Award for Song Of The Year for his composition “My Next Ex-Wife” and has written songs for a growing legion of other musicians. Three of his songs found their way onto Grammy-nominated albums: “Don’t Put Your Hands On Me” (on Koko Taylor’s Force Of Nature), “I’m Just Lucky That Way” (on Robert Cray’s Shame + A Sin), and “Homely Girl” (on John Hammond’s Trouble No More). Estrin cites Sonny Boy Williamson II, Percy Mayfield and Detroit bluesman Baby Boy Warren as his major songwriting influences. Besides Estrin’s streetwise songwriting and musical skills, he is among the most entertaining and colorful showmen around. His quick wit (as heard to great effect during the introductions to “My Next Ex-Wife” and “That’s Big”) and his signature look—coifed hair, pencil-thin mustache and sharply pressed, custom made suits—add even more color to his performances. “People don’t go out to see people who look like themselves,” says Estrin. “They want to see something special. I was schooled in this business to be a showman, and that’s what you get when you come to see me perform.”

Estrin was born in San Francisco, California in 1949, and grew up following his own path. He discovered an entirely new world when, as a 10-year-old boy, he made his way to the tough Market Street area and befriended many of the neighborhood characters. He had another revelation when his older sister gave him a copy of Ray Charles’ The Genius Sings The Blues when he was 12. Albums from Jimmy Reed, Champion Jack Dupree, Mose Allison, Nina Simone and others soon followed. By the time he was a teenager, Estrin had completely identified with the urban, African-American culture surrounding him. He got his first harmonica at age 15, and by age 18 was proficient enough to begin sitting in at black clubs around the city. He first jammed with blues master Lowell Fulson and almost immediately was hired to open five shows for R&B giant Z.Z. Hill. He worked five nights a week for almost a year with guitar legend Travis Phillips in a band fronted by famed pimp/bluesman Fillmore Slim (who was the centerpiece of the acclaimed Hughes Brothers documentary American Pimp). Slim introduced Estrin to Rodger Collins (“She’s Looking Good,” “Foxy Girls In Oakland”), the man who would become Rick’s first real musical mentor, and who schooled Rick on the finer points of songwriting and show business. Estrin moved to Chicago when he was 19 and worked with South Side bluesmen Johnny Young, Eddie Taylor, Sam Lay and Johnny Littlejohn before meeting and jamming with Muddy Waters, who told Rick, “You outta sight, boy! You got that sound, boy! You play like a man, boy!” In fact, Muddy wanted Estrin to go on the road with him, but due to nothing more than a missed phone call, it never happened. Rick eventually moved back to the Bay Area, met Charlie Baty and formed Little Charlie & The Nightcats.

For more than 30 years and nine albums, Rick fronted the band, featuring Baty’s one-of-a-kind guitar acrobatics. The band won international acclaim and toured the world repeatedly. They were nominated four times for the prestigious Blues Music Award for Band Of The Year. With Charlie’s retirement from touring in 2008, Rick rededicated himself to his craft. Hansen and Farrell wanted to keep the band going. Estrin knew the only way to replace Baty’s crazed and unique guitar style was to find someone with an equally insane and individual approach, and he knew that would be a tall order to fill.

As luck would have it, Kid Andersen, who had been working with another harp legend, Charlie Musselwhite, became available. “Kid’s a fearless nut on the guitar,” says Estrin. “He’s really the only guy who could fit in with us.” With an unpredictable, no-holds-barred style that perfectly meshed with Estrin’s wildly imaginative original songs, the new band charged out of the gate with Twisted in 2009 and One Wrong Turn in 2012. Blues Revue raved, “Rick Estrin & The Nightcats are one of modern blues’ most versatile and original bands.”

As a testament to their talent, audiences at their performances are often peppered with musicians wanting to glean a lick from these dynamic musical masters. Fans ask to go home with a CD that reflects what they just witnessed. Now, with You Asked For It...Live!, Rick Estrin & The Nightcats can satisfy their fans’ demands. Estrin recalls, “After shows, people are always asking, ’Are any of these CDs live? Which of your CDs is most like what you did tonight?’ Now, I can tell them, ‘This one right here. Thank you. We’ll be happy to sign it.’”

Kid Andersen (guitar, background vocals)
Chris “Kid” Andersen was born in Telemark, Norway in 1980. A blues fan since childhood, Andersen fell in love with the music of Otis Rush, Buddy Guy, Junior Watson, and the Kings (B.B., Albert and Freddie). By the time he was 18, he was backing all the American blues stars who came through Norway, including Homesick James, Nappy Brown and Willie “Big Eyes” Smith. He moved to California at age 21, eventually earning himself a green card as an “Alien of Extraordinary Ability.” Andersen released four solo albums before joining blues harmonica legend Charlie Musselwhite’s band in 2004, a gig that lasted until he joined Rick Estrin & The Nightcats. Andersen runs his own recording studio, where he has produced and mixed recordings by artists including Elvin Bishop, John Nemeth and Finis Tasby, as well as all three Rick Estrin & The Nightcats CDs.

Lorenzo Farrell (upright and electric bass, piano, organ, synthesizer)
Lorenzo Farrell was born in Lexington, Kentucky, and grew up in Bloomington, Indiana, where he started playing piano at age five. During his high school years in California, he discovered jazz and made the switch to upright acoustic bass. After high school, Farrell took several years off from his music career to earn a degree in Philosophy from the University of California at Berkeley, and study religion in Delhi, India. Since returning to the San Francisco Bay Area, he has been a highly sought-after multi-instrumentalist, having returned to piano and mastered organ in recent years. A Nightcat since 2003, Lorenzo has also had the opportunity to perform and/or record with many other artists, including Collective Amnesia, the Contemporary Jazz Orchestra, Noora Noor, Terry Hanck, and Steve Lucky and the Rhumba Bums.

J. Hansen (drums, vocals)
J. Hansen is the only singing, songwriting, standing drummer in the blues. Born in Joliet, Illinois, he started drumming on pots, pans and coffee cans at a very early age. He moved to California in 1984 and began studying the drums seriously, playing his first gig at age 13. Hansen began his musical career playing traditional jazz with multi-instrumentalist Clint Baker, which eventually led to performing and recording with legendary New Orleans banjo player Narvin Kimball (Preservation Hall Jazz Band). While studying music in college, Hansen started working in local Bay Area blues bands. He fronted his own R&B/funk band, Verso, which featured his singing and songwriting. He later toured internationally and recorded with the popular San Francisco swing band Steve Lucky and the Rhumba Bums before joining the Nightcats in 2002. He released a solo album of original material, Give The Drummer Some, in 2009. In 2011, Hansen began playing his drums standing up, adding even more dynamic energy to the group.