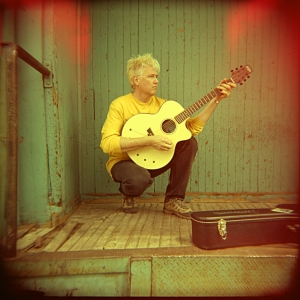 From the deep, cold & dark of Buffalo, NY comes an artist - Rick Denzien -
who is digging out - with songwriting that has ignited his new CD release,
RADIATE.

As if fate was like being stuck behind a snow plow on the Thruway in the middle of a raging blizzard on pack snow & black ice while driving 65 mph…never being able to see more than 15 to 25 feet ahead.”

“Some call it blind faith, stupid, an accident waiting to happen… but out in Western New York we call it winter driving.'

Driving blind can be greatest teacher because it takes us to the raw un-processed edges - like when blade of the steel plow sparks against the frozen road - that’s where we can find salvation - or crazed we smash into the **** end of a truck, driven by an over worked, underpaid NY-DOT worker."

Disappointments, bittersweet rewards, lost love & found dreams, released illusions; RADIATE broke through like a faint light traveling an infinite distance finally arriving along an empty and desolate road - a star on the horizon.

Rick Denzien has been collaborating with Michael G. Ronstadt for several years having co-produced his last 3 CD’s.

Michael, Linda's nephew, has a master in cello, is singer/songwriter, is an artist in his own right and side man cellist with many Philadelphia area artists like mutual friend Craig Bickhardt.[brother Pete Ronstadt & Rick mixed Craig’s “live at Sellersville Theater” CD] Rick took Michael on a leg of his tour through Western New York, playing the iconic Buffalo NY rock club Nietzsche’s. [Rick returns there this August to play Buffalo’s infamous “Infringement Festival”.] Many of the songs co-written by Rick & Michael show up on the “Foolish Fox” CD along with a cover of one of Rick’s songs from his “Heal the Land” CD – “All Over You”. If you listen to Rick’s Radiate & Green Sky CDs, you’ll hear Michael’s cello featured on several songs, and if you listen to Michaels CD’s you’ll hear backing vocals by Lyra Project – Rick’s musical entity with Debra Lee.

Rick & Michael recorded their projects at www.Bah-FoStudio.com powered exclusively by wind and rooftop solar. The studio is zero carbon and zero methane. Rick has been driving 100% electric and eating vegan since 2013 and is now considered a leader in the Zero Emission Musician movement. This past Earth Day he produced the 2nd annual www.ThriveFest.Us an original music and sustainability conference held in Ambler, PA with over 30 performing artists at select venues with an electric vehicles show.
1
What's This
Advertisement