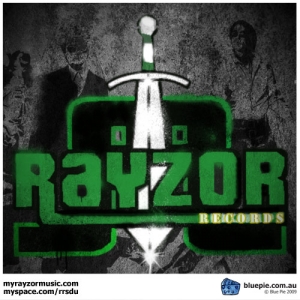 Ray Daniel (Rayzor) and Justin Huggett (Jutty) make up the record label Rayzor Records. They both find music has always been a great release for celebrations and disappointments. Both Ray and Justin have had a hard life but now have come together to pursue their dreams.

Ray aka Rayzor
By the age of sixteen Ray had been through a lot in his life, with unpleasant times. Yet this is what moved him towards music. Through a friend he started listening to Snoop Dogg and 2Pac in particular. There was strong lyrics in 2Pac’s songs that held a lot of meaning for Ray. This then brought Ray to start writing his own lyrics. Ray was told by his music teacher that it would best in his best interest to leave his music as he was far behind. This ushed Ray even more. It wanted to make a point. He wrote more and spent time learning how the style of music he was becoming involved in was made. This made the teacher see his true passion for music and come to understand he was not going to give up.

Ray has received a scholarship in a Sound and Engineering College, which helped him in the recording, mixing and programming side of things. It had come time to make produce an album, the hardest choice for Ray was not finding songs for it but deciding what songs to cut off. The songs are based on life influences of his own and some stories that his heard from his friends and family.

Justin aka Jutty
Justin was born in west Wyalong, the same country town as Ray.
Things were hard for him as a child. He started singing and writing at the age of 15. Jutty realised music and singing could take him away from his life and also believed that there might also be someone in the world that could understand what he was going through.

After settling into Sydney life Jutty caught up with Ray and started recording there songs. They have both dreamed of perfoming on stage for a crowd. There dream is surely coming true.


Both Ray and Jutty truly believe in each other’s talent. Rayzor Records are now part of Blue Pie family and all this after all the kids laughing at them and teachers telling Ray he should quit music. What a great way to hit back strong.