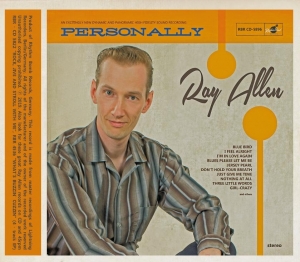 Incredible! Wow! Three years have passed since Ray Allen and his band produced their last album Rock, Jive & Stroll with Me!, an album that still inspires Ray Allen’s fans and critics alike.
After celebrating their 10th Anniversary with Rhythm Bomb Records, now things are really shaping up. The band has been performing numerous shows, writing songs and recording in studio. They have come up with a whole new bag of great songs on the album in your hands!
Ray Allen grew up in the countryside. As a boy he would pick Tobacco leaves every day after school and he saved up 30 bucks to buy himself his first guitar. Soon afterwards he started a band, and at age 15 he was so absorbed in his music, the melody and rhythm of the rock and roll age, he just HAD to reproduce it. Today Ray is a popular international performer and still has his love and passion for music, and if he has changed at all in his career it’s a closer connection to his audience, fellow musicians, and friends. He has grown musically.
By now, people know Ray Allen’s wide musical range and can experience that range when they see him and his great band on stage, or hear one of their albums at home or in their car. You will be glad to hear that this hasn’t changed on this new record. On the contrary, the range of style in his repertoire has actually increased.
Again, back at Lightning Recorders Berlin - Germany, Ray Allen used very accomplished musicians, equipment and technicians to produce another great album.
Ray went big this time around! He added bigger arrangements, harmonies and hep studio professionals to fire up this record! You will also notice a more soulish, deeper and melancholic side of his music with a clear bright sound.
Once again, Ray shows his singing talent in a variety of music styles and different moods.
Included on this record are emotional songs like “Divorce”, “Blue Bird” and “Blues Please Let Me Be” where he sings from his soul. You can also find songs about love here such as “Kiss Me”, “Girl-Crazy”, “I’m In Love Again and the awesome duet „Three Little Words“, featuring the fantastic Carrie Lewis…and oh how they’re voices harmonize, accompanied by an acoustic Latin guitar…
Let me mention that this time around, the band used only original material. All songs are written by Mathias Arnold and Martin Wauer. The latter can also be heard here with his fab piano playing.
You’ll want to listen to this album over and over, because there is a lot to discover. Ray Allen and band hope you’ll have a blast listening to this album and dancing the night away!
2
What's This
Advertisement