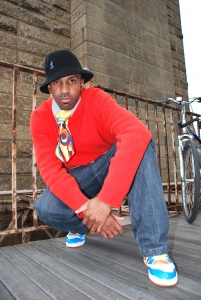 What can you say about a Young MC (not to be confused with the one hit wonder) who is up and coming, raw & witty, spitting real fire but conscious lyrics, holding down Open Mic venues all throughout NYC, and reps Jesus Christ as his Lord and Savior to the fullest without compromising His standards? Well meet the God MC from Brownsville-Brooklyn, NY by the name of Q The Prophet The Soul Hustler.

Born Quason T. Durant is one dynamic multi-talented sensation. He is a rapper, producer, songwriter, composer, dancer and actor. Q has performed on the same stages with artists such as Ice-T, LL Cool J, Shyheim, Smooth the Hustler & Trigger the Gambler, Jin the Asian emcee, Lady Luck, as well as, Hezekiah Walker, Helen Baylor, Vickie Winans, Cissy Houston and Donnie McClurkin to name a few. His first gospel hip-hop exposure was in August of 1994 at the Greater Allen Cathedral when they shot a music video entitled, Reach One-Teach One, and also has a
cameo appearance in Radio Head's music video entitled, No Phone.

His talent has also earned him 1st place in the 2003 McDonald's Gospelfest at the legendary Newark Symphony Hall in Newark, New Jersey. Q has performed in numerous showcases in NYC consistently putting it down in spots like Training Camp (hosted by Mental Supreme) @ Club Pyramid and Unsigned Live NYC (hosted by Red Bandit and AOS Entertainment) @ Club Speed, including shows @ the Platinum Lounge, Cherry Lounge, Sputnik's in Bklyn, Caroline's Comedy Club, Bowery Poetry Club, Remote Lounge, Don Hill's etc, including out of state. He as also made television appearances and radio interviews. Q The Prophet was also the 2006 nominee in 2 categories for the 4th Annual
Underground Music Awards, and then became nominated in 2007
for Best Gospel Hip-Hop at the 5th Annual Underground Music Awards.

Q is not only a musician, but is also minister of the Bible Faith Word Cathedral church in Brooklyn, NY under the leadership of Bishop Gregory A. Foster. Q holds a very strong testimony of the street life. He came from hustling drugs and gang banging, to preaching the gospel at the age of 15. Q shares his testimony to over millions of youth who are caught in the thug life.

Q also has an E. P. currently being pushed independently entitled, Touch & Agree, and was formerly of the collective once known as
Missionfield. Now Q The Prophet runs with a strong movement of
positive artists, and entrepreneurs, known as The B. U. R. N. U
Movement; where their objective is to bring unity through Hip-Hop.

With all these accomplishments, and achievements; there is no doubt that Q The Prophet has already carve himself into Hip-Hop history, without a publicist, and only little bit of radio and television airplay. And the future of the music industry is looking much brighter for the young artist to enter in, and make ultimate impact. He constantly focuses on God, and maintaining integrity and good character. His heart is always open towards the youth of today, and making a difference in people's lives, through the power of Jesus Christ. His labor for God is not in vain.

There is Jay-Z, DMX, 50 Cent, Nas, and there's Q-The Prophet!! Get ready to see and hear the next phase & praise of Hip-Hop like you have never heard or seen before, as Q hits every street corner worldwide one thug at a time.

In God's business, it's a 24-7 operation; and The Hustle Just Won't Stop!
1
What's This
Advertisement