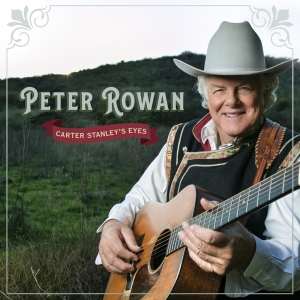 Peter Rowan was just a young bluegrass boy when he caught the attention of Bill Monroe, who made him an actual Blue Grass Boy in 1963, or maybe ’64. Rowan isn’t certain exactly when he became the band’s guitarist and lead singer, but the moment Monroe introduced him to fellow icon Carter Stanley is etched in his memory just as indelibly as the inked entry in his 1966 diary. Within a few months, Stanley would be gone, but the impact he and his brother, Ralph, had on Rowan — and the world — would grow even stronger. He acknowledges their influence, and finally gives the story of that meeting a definitive telling, with his new Rebel Records album, Carter Stanley’s Eyes.

Releasing April 20, the album pays respects to bluegrass’s most famous brothers with two songs penned by each; others, such as the traditional “Hills of Roane County” and the Carter Family’s “Will You Miss Me,” were Stanley Brothers staples. Even the album’s opener, Rowan’s own “Drumbeats on the Watchtower,” nods to Ralph, who retitled it (from “Wild Geese Cry Again”) when he recorded it.
Obviously, Rowan didn’t mind. In fact, he was ecstatic when Stanley told him he’d cut it. “To me, that was real fulfillment, to be covered by one of the masters,” he says.

“But this album is not a tribute to the Stanley Brothers; it’s an honoring of them, and of my roots,” Rowan clarifies. More specifically, it maps the path he followed from their musical roads to his own. Along the way, he visits Monroe (“Can’t You Hear Me Calling”), the Louvin Brothers (“A Tiny Broken Heart”) and Lead Belly (“Alabama Bound”), whose presence reinforces both his and Monroe’s blues influences.

Together, they do indeed honor their forbears, staying faithful to tradition instead of going for what Rowan calls the “razzle-dazzle” of progressive bluegrass or jamgrass. “To me, the importance of the music is in the songs,” he says. “It’s about the poetic material. Bluegrass is part of a literary tradition, a poetic tradition.”

In the title song, Rowan actually recites the verses; the tightly blended harmonies come on the chorus. It’s a perfect device for expressing the connection they felt as Monroe symbolically passed the baton from “the best of the Blue Grass Boys” to a worthy successor.

In that chorus, We climbed upon a mountain, Bill Monroe and I, so I could see the light that shines in Carter Stanley’s eyes, Rowan implies something else: the quest for wisdom from our elders — even though Stanley was only 15 years older. That’s also part of the bluegrass tradition; players often learn from elders passing it on.
Rowan also broaches the subject of mortality, a prominent one in gospel and bluegrass. It permeates much of this album, as one might expect from a man reaching life’s later chapters.

The Carters’ questioning “Will You Miss Me,” done partly a cappella, is an obvious example — as well as a precise illustration of the roots gospel and bluegrass share; “A Crown He Wore,” by Lois Mann and Mac Odell, mines the same vein.

But there’s no mistaking this album as anything but pure bluegrass. There’s even a murder ballad (“The Hills of Roane County”). And one can almost hear Ralph Stanley’s spirit inhabiting “Drumbeats” as Rowan sings, I hear drumbeats on the watchtower/My long journey's at an end/Autumn leaves blow on the border/I hear wild geese cry again. Expertly conveying hints of foreboding and relief, his supple voice nears yodel territory as it soars above intricately laced strings. Monroe’s “Can’t You Hear Me Calling” gets similar treatment, with high harmonies and measures of virtuoso mandolin.

Ralph’s “Ridin’ That Midnight Train” features lightning banjo picking; Carter’s plaintive “A Vision of Mother” brings fiddle to the fore, with mandolin dressing the bridges. The call and full-chorus responses of “Alabama Bound,” offer a change of pace, somehow adding a hint of musical levity to the mix. That’s another tendency in bluegrass: like the blues, it sometimes quilts together the saddest lyrics with the happiest sounds, as evidenced by the upbeat tempo of “A Tiny Broken Heart.”

Then there’s the waltz-time “Too Late to Cry,” which conjures images of couples swirling across dance floors as the singers’ voices swoop in unison around Carter’s mournful melody, like birds in formation.

In the album’s liner notes, Rowan expresses how moved he was by Carter’s “mysteriously longing voice … tragic, yet yearning for spiritual transcendence.”

He further expounds, “When you grow up and it’s time for the real stuff, you’ve got to encounter the honesty of Carter Stanley. And it’s very subtle, because in the southern tradition, nothing was ever laid out straight. People talk sideways all the time.”

Monroe liked to convey how mastering bluegrass was like mastering life, and how overcoming adversity raises you up, but Carter Stanley gave voice to a different aspect of humanity, Rowan says, adding, “He skirted a rare edge of fatalism and exaltation.”
24
What's This
Advertisement