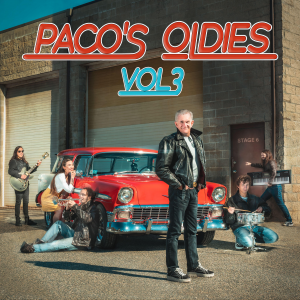 
Click here to return to Paco's Oldies Vol 3, Side 2


“I’m just thrilled with this album.  Paco and the band collaborated to make sure each individual member’s personality is highlighted and the vibe of the album represents Paco’s dedication to pay homage to the classic, great oldies.” ~ Peggy Iafrate, President Strega Entertainment Group

PACO’S OLDIES VOL 3
Although The Paco Band routinely performs all sorts of music, from Pop, and Rock to Christmas Classics and even “originals”, our true niche in the world of entertaining is in performing 50’s, 60’s and 70’s “Oldies”. It is what we are best known for and what our loyal fans expect. Therefore, our first live band Album was destined to focus solely on those wonderful Oldies that tug at our memory strings and go right into our proverbial heart and soul.

Did you know that many articles have been written confirming that our brains actually prefer to hear music from our youth – and that those familiar sounds literally provide us with that wonderful “Cerebral Comfort Food”. Thus…from our own version of “Rock Around The Clock” that sets the albums stage, to songs by Dion, Neil Sedaka, Paul Anka, Bobby Darin, Elvis, Ritchie Valens, Frankie Valli and many more, we invite you too to listen and take in all of that “Comfort Food”. ~ PACO


Featured Video - Your Nobody Until Somebody Loves You -
Song Available On Side 2
This is the last song on our new 20-song “Paco’s Oldies Vol 3” Album is one of my all-time favorites. I use it as my own “Theme Song” when performing. The lyrics underscore what a true life blessing it is to have family and friends that you love and in turn love you…the most precious gift to any of us in this lifetime.

Originally, we scheduled to film the video in February in Los Angeles on the ocean. However, Covid regulations preempted that and instead we decided to film it in July at our “summer camp” on the shores of beautiful Pleasant Lake in Southern Maine, where my own family “gathers”. It proved to be the perfect setting for the script, showing an older guy who realizes all too well what his life would have been like without his loving family to nurture, love and sustain him.

I can only hope that the message in the video can touch your heartstrings. Love…~ Paco


ORDER OF SONGS LISTED ON PACO'S OLDIES VOL 3, SIDE 1

For me, a perfect song to lead off our Oldies Album Volume III. The best know version was recorded in 1954 by Bill Haley and his Comets with the song placing number one on The Charts for two months! I simply love our Band’s own version of this high energy classic in its musically addictive 12-bar blues format. ~ PACO

A Texas “DJ” named J.P. Richardson, who we fondly knew by the stage name of “The Big Bopper” released an iconic Oldie in 1958. The song depicts a young guy flirting with his girlfriend on the telephone. It is one of my favorite Oldies to sing and perform to, using an old hand-held 1960’s style telephone as a prop. ~ PACO

Bobby Darin’s first solo hit in 1967 was written by him on a bet from his friend Murray Kaufman (DJ Murray The K) that he couldn’t write and chart a song beginning with the words “Splish Splash I was takin’ a bath”. However, it actually reached number 3 on the US pop singles chart and launched Darin’s career as a singer. Likewise, I simply love to sing this great “high energy” Oldie. ~PACO

Back in the 1950’s when there were no such distractions as computers or iphones, the best place to be on a Saturday night was parking in a secluded spot with one’s “honeybunch”, listening to “make out music” on the car radio. A singing group who gave us many of those style songs in 1956 recorded one of my own personal favorites, “My Prayer”. Who can forget that wonderful group known as “The Platters”. ~ PACO

It is not at all unusual when I perform this song solo or with our band, to have many of the audience join right in vocally, especially shouting out the names of each month of the year in the easy to remember lyrics. The song was released by the iconic performer Neil Sedaka in 1960 on RCA Victor records. ~PACO

A Mexican folk song about a popular dance, the 1958 adaptation by teenager Ritchie Valens made it one of Rolling Stone Magazine’s top 500 greatest songs of all time. Its popularity was also cast in stone when Valens was killed in the crash of a small plane along with Buddy Holly and The Big Bopper, the “night the music died”. Another high energy Oldies classic that our band loves to perform. ~ PACO

Written and recorded in 1958 by Canadian singer-songwriter Paul Anka, the song was only kept out of the number one spot on the Billboard Hot 100 by Bobby Darin’s “Mack The Knife”. Another great “make-out music” song, performing it today, with its slow, easy-listening tempo, is simply a joy. ~ PACO

Considered by many to be one of the first “rockabilly” records, it was first recorded by Carl Perkins in Memphis. I love to sing the 1956 Elvis Presley version that he sang three different times on national television, launching his fledgling career. Our band’s version is very fun and features Chris Dorsey on trumpet. ~ PACO

A 1961 hit for Dion after he split with his group “The Belmonts”, our paco Band loves to perform it in its fun modified doo-**** style. We have even included a vocal song intro between me and my wayward girlfriend “Peggy Sue” (our bands own female vocalist Natalie Oronzo). The lyrics tell the story of a disloyal girlfriend who constantly cheats on her guy. An all too familiar story that many of us experienced first-hand while growing up. ~ PACO

Another easy to recognize and sing-a-long to doo-**** style song recorded first by Barry Mann in 1961 and released by ABC-Paramount Records. It is a novelty, fun to sing song, that tells how the singers girl fell in love with him while dancing with him to some of the crazy song lyrics of that era. It seems to have an infectious tempo and rhythm that supports the silly but fun to sing lyrics. ~ PACO

PACO BIOGRAPHY
Paco is a full-time singer, actor and entertainer, affiliated with Bristol
Recording Studios in Boston where he recorded this, his 9th CD Album of Oldies, featuring his live band. His albums and songs play
regularly on the radio and internet both in America and internationally, through AirPlayDirect out of Nashville, with many making it to “The Charts”. He is also signed with Strega Entertainment Group of Boston, LA and Nevada as his agents. Recently, they assisted him in forming his band, a six-member group of phenomenal young musicians primarily from Berklee College of Music in Boston.