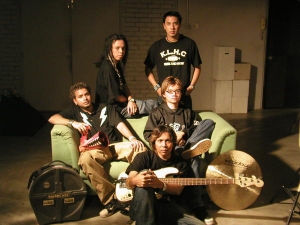 Undoubtedly one of Malaysias most hardworking bands, Pop Shuvit began making waves in the local music scene in late 2001. Comprising of Moots (vocals), JD (guitars), AJ (bass), Rudy (drums) and UNO (turntables), the band has had 4 successful releases under their belt and rocked fans throughout Asia notably in Japan, Thailand and Singapore. Known for their adrenaline packed live shows and eclectic blend of hip hop and rock, Pop Shuvit are being touted as Asias leading Hip Hop Rock band.

Their debut album Take & Shuvit broke new ground when their first single Skaters Anthem was released exclusively on the Internet and became one of the most downloaded local songs in Malaysian music history. The hype and street buzz from the track caught the ears of ESPN, who in turn licensed the track for use in their Summer X-Games broadcast that hit millions of households worldwide. As further credit to Pop Shuvit, ESPN played their music videos and tracks off the album throughout the duration of competition.

In 2003, Pop Shuvit released Take it and Shuvit in Japan and became the first Malaysian band to hit the music chart in Japan. The overwhelming support from Japanese youth market ensured that all tracks of the album charted the top 20 on the Tower Records sales charts (even beating raprock luminaries like Linkin Park) without any promotion to back the album.

The success of their releases in Japan led to Pop Shuvit touring the Pearl of the Orient in 2005 to support their sophomore release, HERE & NOW, leading to one of the most successful and talked about headlining tours for any Malaysian rock band. The album was a hard-hitting social commentary of urban culture and spurred hits like Old Skool Rocka and Journey, with the latter earning the band the #1 Song of the year on the Malaysian English Top Ten for 2005 and Best Rock Act at the inaugural Hitz.fm Malaysian English Top Ten Awards.

Always one to go against the grain, the band released a dance remix album and a hip hop EP in 2004 and 2006 respectively. The remix of their track Conversations from the Shuvit Remixes dance CD was hand picked by uber DJ Nick Warren for inclusion in pioneering UK dance music label Global Undergrounds mix CD, Shanghai GU28 that peaked at #19 on the UK TOP 40 Dance Album Charts. The hip hop EP, a 4 track 12 inch vinyl release, featured collaborations with some of hip hops most respected emcees from around the globe including US emcees Big Pooh from Little Brother, L.E.G.A.C.Y, Cesar Comache, ZION from ZION I, Def Jam Japans DABO and Reggaeton duo Nitro Y Fanta from Puerto Rico.

Not resting on their laurels, Pop Shuvits eagerly anticipated third album, aptly titled Amped & Dangerous hit stores in Japan on 23 August 2006 with a later release date being planned for the Malaysian market. The 12 song set is a rollercoaster ride of crunching guitars, pounding rhythms and funked out hip hop beats and rhymes.

This is essentially a guitar driven album thats made for the mosh pit. Simply put, it rocks harder! says skinman Rudy about the new material.

Malaysian fans can expect something different as Guitarist/Producer JD hinted, We had to think strategically this time around and only release tracks that cater for a specific market so the Japanese/Asian and Malaysian editions will be different.

The Japanese edition of the album will be released throughout Asia as an import edition so fans will still be able to obtain both copies.

Being independent, the boys understand that there is a need to diversify and take the band to the next level as frontman Moots! Pointed out, Thats the essence of Pop Shuvit, we always do things differently and love taking risks. We want to turn Pop Shuvit into a brand name and to do this we need to branch out and spread our wings be it in music or other facets of urban culture.

True to their word, the boys have done just that by setting up Shuvit Management and Studio 21:05 to undertake the responsibilities of band management, marketing, music publishing and music production. Based in Taman Tun, Kuala Lumpur, Studio 21:05 is a fully equipped professional recording studio owned by Pop Shuvit and run by guitarist JD who is a qualified professional audio engineer.

The next step for Pop Shuvit will be the world of fashion where Pop Shuvit have already sold out 3 limited edition T-shirt designs under its Unknown Clothing merchandising line and are in the midst of taking its clothing line to retails stores throughout Malaysia, a testament that the band is evolving and building itself into a successful business.