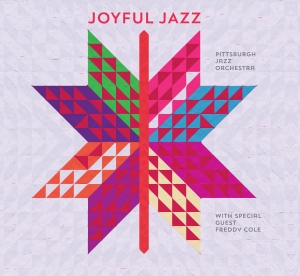 INQUIRES: For CDs, interviews and photos contact:
Renee Govanucci / 412-322-0820 / rgov@manchesterbidwell.org
When the Pittsburgh Jazz Orchestra formed in 2010, the co-artistic directors, Sean Jones and Mike Tomaro decided a Holiday show would be a programming must. Now the Pittsburgh Jazz Orchestra Holiday Celebration has become a tradition for families all over the Greater Pittsburgh region as a way to take a break from the busy prep of the season. That tradition found its home at Manchester Craftsmen’s Guild (MCG) Jazz. Jones, says, “We want to try to recreate the spirit of what the Holiday is all about.”

For years now, this very popular concert has spread Christmas cheer for audiences across the Pittsburgh region. On Joyful Jazz, their first ever holiday release, the skilled musicians of the Pittsburgh Jazz Orchestra rendered a new treatment on holiday classics with wonder, bliss, and merriment. This exciting new holiday album will share our Christmas joy beyond our borders and show off the finest musicians in the region. With featured vocalist Freddy Cole providing his impeccable sense of swing, expressiveness, and elegance, you and your family will discover the spirit of the season on this collection of Joyful Jazz.

“Jingle, The Christmas Cat” has become a signature holiday tune for Freddy Cole. This big band arrangement stays true to the song’s endearing and amusing way. Other offerings by Cole include “A Cradle In Bethlehem” and a new arrangement, commissioned specifically for Mr. Cole and the PJO, of “White Christmas.” Arranged by Jay Ashby, this classic Irving Berlin tune is transported to the Sahara and given a decidedly Middle Eastern flare. The fourth vocal track on the album features the late Maureen Budway on “The Christmas Song.” “Merry Christmas, John Coltrane” is a new composition by Tomaro that combines the basic changes from “Giant Steps” with a reference to “Deck The Halls.”

Pittsburgh Jazz Orchestra Holiday Celebration at MCG Jazz will be December 12, 2015 and will include special guest Ann Hampton Callaway. This is a live melding of two of MCG Jazz’ newest releases: PJO’s Joyful Jazz and The Hope of Christmas by Callaway. Both Christmas albums release in October 2015. The December concert will feature a mix of traditional favorites and brand new music from both records to celebration the season in a new way.