"One Night In With Hope And More Vol. 1" 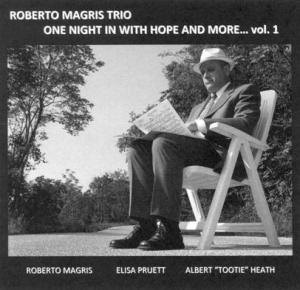 Born in Trieste (Italy) in 1959 Roberto began his jazz career in the late ‘70s. In the ‘80s, he led a jazz trio named "Gruppo Jazz Marca", whose recordings were reissued in 2006, as collector’s items, by the English label Arision. During the times of the "iron curtain", Magris was privileged to be one of the very few West European musicians to collaborate on a regular basis with the East European musicians on the jazz scene. He performed in the former Czechoslovakia, Yugoslavia, DDR/Eastern Germany, Hungary and Romania. In 1987, he formed the "Roberto Magris Quartet” that continues to play, record and schedules tours all around the world. This unit has recorded several CD’s, among them the classic album "Maliblues" (Map).
From 1998-2002, Roberto Magris was bandleader for the "Europlane Orchestra", a central-European jazz venture sponsored by INCE-CEI (Central European Initiative) which performed and has recorded 3 CD’s: "Live at Zooest" (Zooest), "Plays Kurt Weill" (Pull) with singer Ines Reiger and "Current Views" (SoulNote) featuring guitarist Philip Catherine and vibraphonist Bill Molenhof.
In 2003, Magris continued to build bridges and forge close bonds of musical relationships as he formed the "Roberto Magris Europlane". This unit was designed to include a unique blend of the best European and American jazz artists in one musical context. This unit has recorded 2 critically acclaimed straight-ahead jazz CD’s entitled: "Il Bello del Jazz" (SoulNote) with saxophonist Herb Geller (the West-Coast jazz master) and "Check In" (SoulNote), featuring a saxophone duo of Tony Lakatos and Michael Erian. Both CD’s received stunning reviews from the International jazz critics. From these recordings and performances a compelling musical partnership has been formed with one of Europe’s finest soloist, jazz saxophonist, Tony Lakatos.
In 2006, Magris started his collaboration with musical icon, Art Davis (the legendary bassist for John Coltrane, Dizzy Gillespie, Louis Armstrong and Max Roach as well as other notables) and also started his fruitful partnership with Paul Collins, the music impresario and founder of JMood Records, the Kansas City based jazz label. This same year Magris made his USA debut in Hollywood, California performing at such famous jazz venues as "The Jazz Bakery" and "Catalina’s Jazz Club". In 2007 Magris returned to the USA for a performance at the Historic 18th and Vine Jazz District in Kansas City. His performance at “The Blue Room" also included a jazz tribute to the late jazz and blues icon, Jay McShann. Magris took this opportunity to record the CD entitled "Kansas City Outbound" (JMood), on trio with Art Davis, on bass and Jimmy “Junebug” Jackson (the 21 year veteran drummer for Jimmy Smith) and Zack Albetta, on drums.
In 2008, Magris returned to Los Angeles as bandleader for concerts and to record the CD entitled “Mating Call” (JMood) with an all-star USA quintet which included Paul Carr and Michael O’Neill on saxes, Elisa Pruett on bass and the legendary musical stylist, Idris Muhammad on drums. In the same year he also participated, as a guest soloist, composer and arranger, in the CD "Big Band Ritmo-Sinfonica Città di Verona plays the music of Roberto Magris / Restless Spirits" (Velut Luna).
In 2009, Magris renewed his outstanding collaboration with legendary saxophonist Herb Geller (who worked with Benny Carter, Clifford Brown, Chet Baker, Benny Goodman, Scott LaFaro, Bill Evans as well as other notables) performing together at several jazz festivals and clubs in Europe. In the same year, Magris returned to Kansas City as bandleader for concerts and to record the CD entitled “Morgan Rewind: A Tribute to Lee Morgan, Vol. 1” (JMood) with another all-star USA quintet which included Brandon Lee on trumpet, Logan Richardson on alto sax, Elisa Pruett on bass and the world renowned jazz drummer Albert “Tootie” Heath (the brother of Jimmy and Percy Heath, from the legendary Heath family). In Kansas City he also recorded the CD entitled “One Night In With Hope & More” (JMood), on trio with Elisa Pruett, on bass and Albert “Tootie” Heath, on drums, as a special tribute to his favourite be-bop piano masters such as Bud Powell, Elmo Hope, Herbie Nichols, Barry Harris and Tadd Dameron.
In 2010, Magris performed in Los Angeles again together with singer Madaleine Davis (who was the leading voice for “Boney M” group) and returned to Kansas City again as bandleader for concerts and to record 3 more albums: the CD sequel “Morgan Rewind: A Tribute to Lee Morgan, Vol. 2” (JMood) with a brand new septet including Hermon Mehari on trumpet, Jim Mair on sax, Peter Schlamb on vibes, Elisa Pruett on bass, Brian Steever on drums and Pablo Sanhueza on percussions, to finish up on the trio project “One Night In With Hope and More” Vol. 2 and a special jazz-funk project entitled “Cannonball Funk’N Friends” (JMood) with an American quintet featuring Alonzo “Scooter” Powell (the renowned native Kansas City drummer who is a LA studio musician, music teacher and has worked with the Grammy Award winners Norman Brown, Sting and James Ingram, just to mention a few).
Magris has recorded 16 albums with his own groups and has played concerts in 38 different countries in Europe, America, Asia, Africa and Australia, also performing at the best jazz festivals and jazz clubs in the world.
In the early years of his career, he performed as a sideman with legendary jazz masters such as Kai Winding, Eddie Lockjaw Davis and Sal Nistico. Other outstanding musical collaborations include Franco Ambrosetti, Florian Brambock, Frantisek Uhlir, Darko Jurkovic, Richie Buckley, Janusz Muniak, Ricardo Cavalli, Achim Goettert, Fabio Jegher, the "Traditional Jazz Studio" from Prague, and the percussion players from Gabon, Africa. As a complementary musical experience, in the ‘90s Magris led the acid jazz group "DMA Urban Jazz Funk" which recorded 2 CD’s. In 2003, he formed and continues to perform with “Alfabeats Nu Jazz", a "progressive urban jazz" band, recording the CD "Stones", which has received high reviews from the jazz critics and international jazz community.