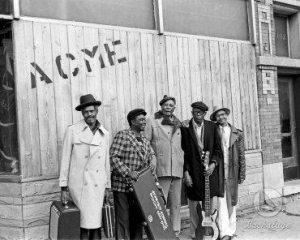 The music has the unforced feel of (Chicago’s) blues of the late 30s and 40s without once sounding anachronistic. The five musicians (playing as a quintet) share the vocal duties, providing striking contrasts…All the material is original in the true sense, not just old blues with reshuffled lyrics and new titles, and the quintet interprets it with real conviction. Horton is featured on seven of the seventeen numbers. -Manchester, England Evening News

Honeyboy Edwards
David "Honeyboy" Edwards was born June 28, 1915 in Shaw, Mississippi, and passed away on August 29, 2011 at his home in Chicago, Illinois. Honeyboy was one of the last living links to Robert Johnson, and one of the last original acoustic Delta blues players.

Over the course of his 39-year association with Earwig Music Company and owner Michael Frank, Honeyboy went from a lesser known figure in the blues world to a living legend, and his personal odyssey is truly legendary. He was the epitome of a Delta bluesman, the real deal. He toured world-wide, playing many clubs, theaters and festivals, and appearing in many documentaries about the Blues and about American music.

Sunnyland Slim
He was born Albert Luandrew on September 5, 1906, in Mississippi and received his early training on a pump organ. After entertaining at juke joints and movie houses in the Delta, Luandrew made Memphis his homebase during the late 1920s, playing along Beale Street and hanging out with the likes of Little Brother Montgomery and Ma Rainey.

Slim moved to Chicago in 1939 and set up shop as an in-demand piano man, playing for a spell with John Lee "Sonny Boy" Williamson before waxing eight sides for RCA Victor in 1947 under the somewhat misleading handle of "Doctor Clayton's Buddy." If it hadn't been for the helpful Sunnyland, Muddy Waters may not have found his way onto Chess; it was at the pianist's 1947 session for Aristocrat that the Chess brothers made Waters's acquaintance.

Exhibiting truly amazing longevity that was commensurate with his powerful, imposing physical build, Sunnyland Slim endured as a beloved Chicago piano patriarch long after most of his peers had perished. For more than 50 years, the towering Sunnyland had rumbled the ivories around the Windy City, playing with virtually every local luminary imaginable and backing the great majority in the studio at one time or another. He died on March 17, 1995.

Big Walter Horton
Horton was born April 6, 1918, in Horn Lake, Mississippi, near Memphis. He began teaching himself to play the harmonica -- a gift from his father -- at age five, and moved with his mother to Memphis not long after, where he played in Handy Park (near the famed Beale Street) for tips.

Big Walter Horton is one of the most influential blues harmonica players of all time, and a pioneer in the field of amplified harmonica. He isn't as widely known as his fellow Chicago blues pioneers Little Walter and Sonny Boy Williamson II, due mostly to the fact that, as a rather shy, quiet individual, he never had much taste for leading his own bands or recording sessions. But his style was utterly distinctive, marked by an enormous, horn-like tone, virtuosic single-note lines, fluid phrasing, and an expansive sense of space. Horton's amplified harp work graced sides by Muddy Waters, Jimmy Rogers, Otis Rush, Johnny Shines, Tampa Red, and many others; he was frequently cited as an inspiration by younger players, and most accounts of his life mention a testimonial from legendary bassist/songwriter Willie Dixon, who once called Horton "the best harmonica player I ever heard." He died on December 8, 1981.

Floyd Jones
Floyd Jones was an American blues singer, guitarist and songwriter, who is significant as one of the first of the new generation of electric blues artists to record in Chicago after World War II. A number of his recordings are regarded as classics of the Chicago blues idiom, and his song "On the Road Again" was a Top 10 hit for Canned Heat in 1968. Notably for a blues artist of his era, several of his songs have economic or social themes, such as "Stockyard Blues" (which refers to a strike at the Union Stock Yards), "Hard Times" and "Schooldays".

Jones was born in Marianna, Arkansas, July 21, 1917. He started playing the guitar seriously after being given one by Howlin' Wolf. He worked as an itinerant musician in the Arkansas and Mississippi area in the 1930s and early 1940s. He settled in Chicago in 1945. In Chicago, Jones took up the electric guitar and was one of the numerous musicians playing on Maxwell Street and in nonunion venues in the late 1940s who played an important role in the development of the postwar Chicago blues. He died December 19, 1989.

Kansas City Red
Arthur Lee Stevenson, known as Kansas City Red, was an American blues drummer and vocalist who played a major role in the development of urban blues. He performed and/or recorded with many blues artists such as David "Honeyboy" Edwards, Robert Nighthawk, Sunnyland Slim, and Walter Horton. Stevenson was born in Drew, Mississippi, on May 7, 1926. He started following Robert Nighthawk in the early 1940s and was Nighthawk’s drummer until around 1946. Nighthawk recorded Red’s song, “The Moon is Rising”.

Red became part of Sonny Boy Williamson II's inner circle and he played on the famed King Biscuit radio show in Helena, Arkansas. He had brushes with law enforcement, women, and jealous boyfriends in the South and California before moving to southern Illinois. He moved to Chicago in the 1950s, where he was a regular at Chicago blues clubs, playing with Johnny Shines, Walter Horton, Sunnyland Slim, Earl Hooker, Blind John Davis, Johnny "Man" Young, Robert Lockwood, Jr., Eddie Taylor, Floyd Jones, and Elmore James, among others. He briefly played with Honeyboy Edwards and in the 1950s he formed a band with Earl Hooker and Johnny "Big Moose" Walker.

He led his own bands, including one that gave Jimmy Reed early professional experience. He owned and operated well-known clubs on Chicago’s west side such as the Boola Boola, the Shangri-La, and the Club Reno. Red’s music career lasted more than 40 years. He died on his birthday, May 7, in 1991.