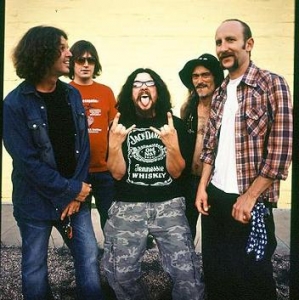 From Blues to Country to Punk, Old Bull are creating their own traditions as they honor those of the past. Hailing from Topanga, CA, their debut album on Big Bender Records, "Manifesto," is a potent collection of anthems for an upside-down America.

Up in the hollers and hills surrounding Los Angeles lies a refuge called Topanga, where you forget you are within spitting distance of the city. Some of the old spirit resides here yet, carefully tended by the old timers who have not yet succumbed to time. A new and undeniable creative force is marinatin' in this place, and folks around here call it Old Bull.
Old Bull is like a deep drink of Kentucky Bourbon followed by a long hit of homegrown. We have roots in Punk, Country, Bluegrass and Blues....It's "Southern California Slamgrass". The way we deliver our music is honest, raw and un-pretentious.
Like White Lightnin' on a disc, the new album, "Manifesto," delivers the goods and them some for those who crave a powerful and assertive yet grownup new sound emboldened by our heartfelt convictions.

Not content to merely play a seemingly endless run of kickass live shows, Old Bull has been signed to Big Bender Records and has just released their debut full length album, titled "Manifesto." It is available through Hapi Skratch distribution. Their first, "Old Bull EP," can be bought on the band's official website as well. www.oldbull.net.