Nick Moss Band Here I am 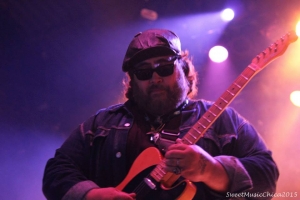 NMB has done 3 dates with Gary Clark Jr. in the last year and the previous cd was voted one of the TOP 50 ALBUMS OF 2014 BY the editors at GUITAR WORLD MAGAZINE!! http://www.guitarworld.com/guitar-worlds-50-best-albums-2014#slide-2

Quotes:
“Merging diverse influences—vintage soul to classic rock, psychedelia to jazz fusion—Moss offers plenty of space for his five-piece to create fresh-sounding compositions.” - Relix
“A high-water mark for the Chicago-based band... the album's 14 tracks will have you tapping your feet along and dropping your jaw at Moss’ many blistering guitar solos.” - Scott Bernstein/Jambase
“Nick Moss’ guitar work speaks in volumes; from soft and moving to scorching and ferocious, he runs the absolute gamut of a blues legend in complete control of his style, form and virtuosity. As relevant as any other master of his craft, Moss proves to be an exceptional force…” Grateful Web

-ROCK AND ROLL WITH SOUL AND BLUES WITH A GROOVE - Featuring the amazing vocals of Michael Ledbetter, (Descendant of the Great Lead Belly) and the blazing inventive fretwork of guitar master Nick Moss.

The Search for Groove: Nick Moss releases a double disc studio album - From the Root to the Fruit

Concept albums were a staple of rock super groups. Whether it was the tale of Ziggy Stardust or Aqualung or Tommy, concept albums presented a glimpse into the soul of the musical storyteller. Unifying themes of life- loss, love, struggle, and success-took the listener on a journey, a spirit quest, an adventure. And no one comes back from an adventure without a story or two of their own to tell.

“The first CD has a bit of 40's and 50's jump blues, Texas, Chicago, and Uptown sounds. The second CD focuses on progressive and experimental music. We delve into 60's soul and the garage punk sound, high rhythm soul and harder sounds,” says Moss. “I wanted to showcase my band. They're a group of guys who just keep growing musically and getting better and better. I also recognized that, as a band leader, I was growing too. And since From the Root to the Fruit is about the growth and development of music, it became a really appropriate catalyst to tell the band's story and my story with the band.”

Moss has been recognized as one the great guitarists of his generation, garnering accolades from Buddy Guy and praise from Jambase, Relix, and Gratefulweb.com among many others. His recording career spans decades and his albums are staples at blues radio outlets worldwide, and are now in rotation at stations with jam and rock formats. Nick Moss Band has a legion of fans that flock to his shows, knowing that each night will be a grand musical experiment. There will be sonic textures to discover and new sounds to stir the soul.

Moss encourages taping at his shows. “Every digital device now has audio and video capability,” he says. “I realized a while back that my CD sales at shows were not impacted by people recording the show. We may be seeing fewer people attending events overall, but we see more people taping and posting. When tapers post, it introduces us to a whole new tribe of fans. Now we're really reaching people in a whole new way.”

Moss is supportive of the community of tapers and sees them as an asset to live performance. “These people really enjoy music and taping lets them be a part of it, part of the band. That's a step in the evolution of how people are going to enjoy music in the future. They advocate for you and what you're doing in a very unique way,” he says.

“The world is getting smaller. We're all becoming closer. You can now reach anyone in any corner of the world quickly and with little effort,” says Moss. “Music is a great conductor, whether it's in a venue or listening online. It brings people together, makes them share an experience or an emotion. To me, that is everything. It's why I do what I do. I want to make people feel what that moment of sublime energy feels like to me as I'm playing with the band. I want that sort of kinetic reaction from listeners.
I want to reach people with music that want to be reached.”

From the Root to the Fruit will be released Friday May 20, 2016 on Blue Bella Records and the band will begin selling the album to fans at the live shows on April 7th. The new disc features Dave Hidalgo on guitar from Los Lobos, Sax Gordon on Saxophone, and Jason Ricci on Harmonica.