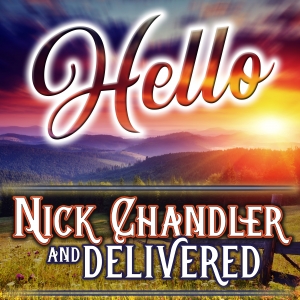 “Our first release received tremendous success and keeping in the traditional Bluegrass lane I am excited and pleased to add Nick Chandler And Delivered to our roster.” –
Sammy Passamano, III – President The (615) Hideaway Records.

Nashville, TN (January 24, 2020) - The 615 Hideaway Records is proud to announce the debut single “Big Bill Johnson” by Nick Chandler And Delivered. Hailing from Western North Carolina Nick Chandler And Driven are a hard driving Traditional Bluegrass band. Their debut single release for 615 Hideaway Records written by Chandler titled “Big Bill Johnson” is a banjo drivin’ barn burner set in the Wild West about a bounty hunter on the trail tracking down his latest dangerous outlaw.

Contained in the lyrics of “Big Bill Johnson” is a reference to the Reno Brothers who historically have the dubious distinction of being the first to rob a train. Watch veteran Bluegrass & Country artist, award winning TV producer and the ambassador of Old Time Music Ronnie Reno talks about this colorful bunch from the past on the specially produced EKP by Sammy Passamano, III.

In addition, the (615) Hideaway Entertainment has produced a captivating high energy performance video for “Big Bill Johnson” which was shot this month on location at the Burnsville, North Carolina town center.
Click below to view the performance video.

Nick Chandler and Delivered were recently honored by being named an IBMA Official Ramble Showcase Artist in 2019 and currently on tour throughout 2020.

“Big Bill Johnson” is available for download to D.J.’s and program directors on Airplay Direct.

Nick Chandler and Delivered were recently honored by being named an IBMA Official Ramble Showcase Artist in 2019 and currently on tour throughout 2020.


ABOUT NICK CHANDLER AND DELIVERED:
Nick Chandler and Delivered is a hard driving traditional bluegrass band from Western North Carolina recently honored to be named an IBMA Official Ramble Showcase Artist for 2019. Nick Chandler has traveled the country for many years delighting crowds with his extraordinary mandolin talents. Nick is a master on the mandolin and has won numerous awards. His talent for writing and arranging songs is evident and his love for bluegrass shows in every note that he plays.
Spencer Hatcher from Thomasville, VA plays banjo and sings tenor, lead, and baritone. He is a fan of the great Don Reno and Raymond Fairchild and his banjo playing reflects that. He plays the banjo, guitar and mandolin.

Gary Trivette plays the bass and sings all parts. A founding member of Claybank, Gary brings passion and excitement to the stage. Gary is an excellent songwriter as well. Hudson Bosworth plays guitar player and sings lead and baritone. Hudson wows the crowd with his hot guitar licks and is the perfect addition to Nick Chandler and Delivered. The bluegrass sound of Nick Chandler And Delivered is centered around tradition and history mixed with the talents of today.