Guy Clark "My Favorite Picture of You" 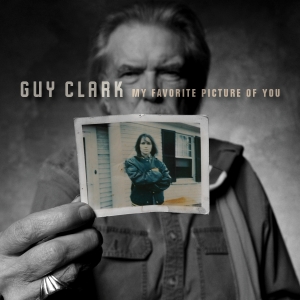 "My Favorite Picture Of You," the first studio album in four years from legendary songwriter Guy Clark, is set for a July 23 release on Dualtone Records. As one of the most revered songwriters of his generation, Clark embodies the term “songwriter’s songwriter.” The simplicity of the recording shines brightly while capturing Clark’s beautifully understated and road worn
vocals. Clark co-wrote 10 of the 11 tracks on "My Favorite Picture Of You" and dug very deep for each performance on this truly inspired collection.
The album’s heartfelt title track was written for Susanna Clark, Guy’s wife of 40 years, and a successful songwriter in her own right, who passed away in 2012. If a picture says a thousand words, then the cover photo of "My Favorite Picture Of
You" declares an entire life. The cover depicts Clark, slightly blurred in the background, holding up an old photo of his beloved from the 1970s. According to
Clark, Susanna walked in and found he and friend, the late Townes Van Zandt drunk, again. She stormed out of the house, which is when the Polaroid was taken. The song is a loving tribute that melts your heart while making you smile.

As a master songwriter, Guy Clark has always made us smile by infusing his wry wit into thoughtful storytelling. Clark’s vocals on "My Favorite Picture Of" You exude truth, wisdom and warmth, only touching on the insight he has gained from an extraordinary life. From the delicate sweetness of “Cornmeal Waltz” to the poignant story of the veteran returned a changed man in “Heroes” to the determined “Hell Bent On A Heartache,” Clark delivers a standout album in a four-decade career overflowing with high points.
In 2004, Guy Clark was inducted into the Songwriters Hall of Fame. He received the Americana Music Association’s Lifetime Achievement Award in 2005, and in 2013, he received the Academy of Country Music’s Poet’s Award, along with Hank Williams. However, Clark’s multiple Grammy Award nominations and
accolades merely hint at the immeasurable impact his songs and recordings have had. He has been a mentor to artists such as Steve Earle and Rodney Crowell and his songs have been covered by a multitude of artists, including Johnny Cash, Brad Paisley, David Allen Coe, Ricky Skaggs, Vince Gill, Alan Jackson, Kenny Chesney, Jimmy Buffet, Asleep At The Wheel and many others.
After 40 years of songwriting, Guy Clark continues to be lauded and admired by his peers, critics and artists young and old from different genres...and he is not done yet.
42
What's This
Advertisement