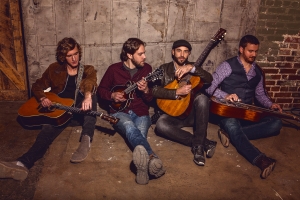 "Mountain Heart manages to straddle the line between complete reinvention and staying true to their roots." — Rolling Stone Country

"Soul Searching is an album that bows to the sentiments expressed in its title, bringing the band to a new plateau of conviction and connectivity..." — Bluegrass Today

"We are talking about great Southern music here, underpinned with virtuosic musicianship full of heart and soul." PopMatters

The dynamic, virtuosic and ever-evolving acoustic outfit Mountain Heart have never sounded better than on their new Compass Records release, SOUL SEARCHING. With deft arrangements and all members contributing to the songwriting, Mountain Heart continues to put their own contemporary twist to traditional acoustic music. Incorporating bluegrass, Americana and pop in uences, Mountain Heart’s sound is a true hybrid — a surprising achievement for a band previously thought of as a traditional bluegrass band. Rolling Stone Country wrote: “Mountain Heart manages to straddle the line between complete reinvention and staying true to their roots.”

SOUL SEARCHING’s 11 tracks are centered around the theme of pursuit and the various forms it can take: the search for self awareness, for an understanding of one’s place in the greater order of things and for the common bonds that unite us all. The title also refers to the changes that the members have been going through, both individually (new children, marriage, moving) and also as a band. The title track, a co-write with Mountain Heart’s Josh Shilling and the The Infamous Stringdusters (featured on their GRAMMY-winning album, Laws of Gravity), captures the restlessness and melancholy of deciding which direction to take in life.

The quartet shines on the album’s rst single, “More Than I Am,” with a pulsing piano groove and driving mandolin rhythm providing the framework for Shilling’s soulful, uplifting vocal.

Other standout tracks include “Festival,” capturing the mood and energy of the outdoor music fest experience with a laid-back groove that explodes into the grop sing-along chorus. By contrast, “No Complaints” cops the spirit of a New Orleans second line, achieving a cross between New Grass Revival and Little Feat, and the lush “Restless Wind” highlights the band’s unique combination of piano, string-band instrumentation, and three-part harmony.

Nominated for GRAMMYs, ACM and CMA awards, Mountain Heart has appeared on the revered stage of the Grand Ole Opry in excess of 130 times and has shared stages with acts ranging from Lynyrd Skynyrd, The Tedeschi Trucks Band, Levon Helm and the Punch Brothers to Merle Haggard, Alison Krauss and many others.
16
What's This
Advertisement