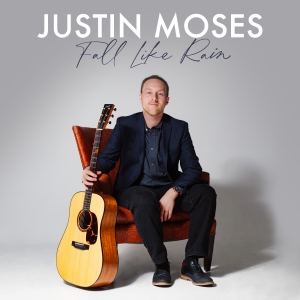 The brand new single from Justin Moses upcoming album (1/22/21) is "My Baby's Gone" (feat. Del McCoury) is now available for broadcasting! We hope you and the listeners enjoy it.

On October 27th Mountain Fever Records releases "Taxland" (featuring Sierra Hull). This is an instrumental written by Justin Moses and showcases Justin and wife Sierra on dueling mandolins! We hope you will include it now in your fall library.

Justin Moses' previous single "Between The Lightning and The Thunder (feat. Dan Tyminski)" released to the public June 30th. A multi-instrumentalist, Justin Moses has just been awarded another IBMA award, 2020 Resophonic Guitar Player Of The Year.

The first single and title-track “Fall Like Rain” released in March of 2020, and is also available on digital music sites and thanks to you on bluegrass and Americana radio stations worldwide.

Justin Moses has become known as one of the finest multi-instrumentalists in acoustic music. He was named 2018 Dobro Player of the Year by the International Bluegrass Music Association. He performed alongside recent Country Music Hall of Fame Inductee, Ricky Skaggs on the CMA Awards in 2018, and appeared on the PBS special Country Music: Live at the Ryman in conjunction with Ken Burns' Country Music documentary in 2019. He recently had his own display at the Country Music Hall of Fame and Museum as a part of their American Currents exhibit, and has become a prominent Nashville session player.

Moses began his musical journey at the age of six after becoming interested in the mandolin. He soon developed a lasting passion for making music. He started to hone his skills playing in his family's band as a child. Since then, he's toured with bands such as Blue Moon Rising, NewFound Road, Band of Ruhks, The Dan Tyminski Band and Ricky Skaggs & Kentucky Thunder. In his two-year stint with Tyminski, he realized an early dream of playing the Grand Ole Opry for the first time and recorded the 2009 IBMA Album of the Year and Grammy nominated album, Wheels.

In 2017, Justin married acclaimed mandolin player, singer and songwriter, Sierra Hull. The two now often perform together as a duo, showcasing their instrumental prowess and close vocal harmonies. These days Moses may be seen almost anywhere and with almost anyone. But he is performing regularly with multi-award winning band The Gibson Brothers and the new version of the Dan Tyminski Bluegrass Band.
39
What's This
Advertisement