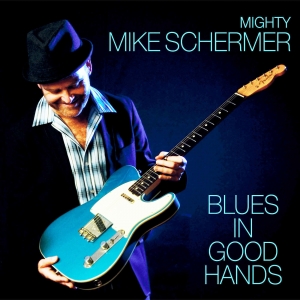 Every once in a while an artist, a song, or a new album emerges that breathes new life and new hope into America’s oldest art form. Such is the case with Mighty Mike Schermer’s latest CD. One listen and you’ll agree... the Blues is in good hands.
Finedog Records and VizzTone are proud to present triple threat guitarist, singer and songwriter Mighty Mike Schermer’s 6th CD BLUES IN GOOD HANDS. Recorded primarily at Kid Andersen’s Greaseland Recording Studios in San Jose, CA, BLUES IN GOOD HANDS features A-list musicians from both the Bay Area, CA and Austin, TX music scenes as well as stellar guest appearances by Marcia Ball, Tommy Castro, John Németh, Carolyn Wonderland, Vicki Randle and many more! State-of-the-art production, vintage vibe, tasteful guitar playing and a natural, unforced vocal delivery come together via one all-important element that is so often missing in modern blues and R&B recordings...great original songs.
“Just hook after hook after hook...one of the best living songwriters in the genre”
– Bill Wax, Sirius/XM Radio
“Equally at ease with hard-**** blues or the spare necessities of vintage soul, Schermer steps forward with clever tunes, sturdy vocals and loads of great guitar!”
– Charlie Lange, Bluebeat Music
Mighty Mike Schermer has been a fixture on the blues scene for well over 20 years, carving out a solid solo career with five critically acclaimed CDs, an award winning single (My Big Sister’s Radio) and thousands of performances at festivals and nightclubs the world over. He has also been the “go to guy” sideman for such heavyweights as Elvin Bishop, Marcia Ball, Maria Muldaur, Angela Strehli, Howard Tate, Charlie Musselwhite, Sista Monica and many, many more. Oh yes…we may be judged by the company we keep, but when the spotlight shines, a solo artist also must be able to bring the goods all on his own.
Mighty Mike Schermer delivers on all fronts.
“Probably the best blues guitarist, singer and songwriter you’ve never heard of…and probably not for long!”
– Tommy Castro
“Every time I play with him my booty hurts afterwards from him kicking it all night!” – Elvin Bishop
“Funky and authentic!” – Bonnie Raitt
“One hell of a guitar player, and an even nicer person!” – Angela Strehli
7
What's This
Advertisement