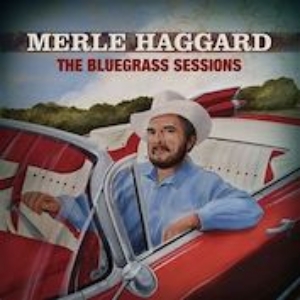 In a career spanning more than 40 years, country music legend MERLE HAGGARD has found a new direction to explore with THE BLUEGRASS SESSIONS, in stores . HAGGARD's first-ever foray into bluegrass - to be released by bluegrass luminary Del McCoury's McCoury Music label - features a duet with Alison Krauss on the HAGGARD-penned classic "Mama's Hungry Eyes."

Joined by a savvy cast of musicians (including Marty Stuart on guitar and mandolin), HAGGARD recorded THE BLUEGRASS SESSIONS at Ricky Skaggs's Tennessee studio in two days of intimate "living room style" sessions, as Stuart explains in the disc's liner notes. "Each take became a performance. Merle's singing was totally inspired," Stuart writes. "In fact, he got to the point where he didn't even go into the control room to listen to playbacks. There was no need. All of us knew what we were doing was right."

Says HAGGARD: "I really enjoyed doing it, and I hope this is just Volume One."

THE BLUEGRASS SESSIONS features a handful of reworked HAGGARD classics (including "Big City"), several new HAG tracks, and a few nods to bluegrass tradition (a medley of Jimmie Rodgers songs, and the Delmore Brothers' album-ending "Blues Stay Away From Me").

Although SESSIONS marks HAGGARD's first venture into bluegrass, it is a logical step for the Country Music Hall of Famer. A pioneering artist in his own right, HAGGARD has long shown an affinity for the roots of American music - whether it's with tributes to predecessors like Bob Wills and Lefty Frizzell, or his recent back-to-basics albums with fellow country luminaries George Jones (last year's Kickin' Out The Footlights ...Again), and Willie Nelson and Ray Price (this year's double CD Last Of The Breed).

HAGGARD has been hailed as "the indomitable guardian of country tradition" in Blender, and dubbed "the most influential country singer of his generation" by the L.A. Times. His disc with Jones earned this praise from People in a 4-star Critic's Choice review: "You'd be hard-pressed to find a better country album than this collection featuring two still-vigorous old warriors." The sentiments for Last Of The Breed with Nelson and Price were similar. Of that disc, Entertainment Weekly said, "This veritable Mount Rushmore mostly revisits forgotten country classics, making this a particularly tasty hall-of-famer hookup."