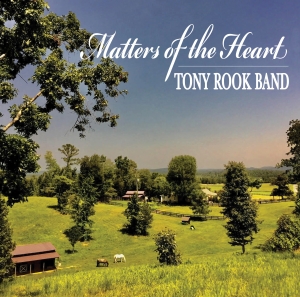 Born and raised in North Carolina, Tony Rook is no bluegrass novice. He picked up his first guitar at the age of 12, rocking out in the local music scene before returning to his bluegrass roots. Tony, now a multi-instrumentalist, describes his music as “incredibly personal.” His songs convey real-life experiences and hardships through soulful lyrical arrangements and intricate guitar riffs.

His album “Labor of Love,” released in 2000 with Rook & Wood, garnered much recognition in the bluegrass community and inspired Tony to continue to push his musical boundaries.

After forming Tony Rook Band in 2017, they released their debut project as a band in October 2018. This project featured ten original tracks which continues to be a focus for this band.

And now in 2022, after hunkering down in the studio during the pandemic, “Matters of the Heart”, which contains all new original material, is being released.

Tony Rook Band members are Terry Johnson on bass and vocals, Graham Sones on banjo and vocals, Tom Schaefer on fiddle, and Derek Birkeland on mandolin and vocals.