Marc & The Wild Ones - She Put A Spell On Me 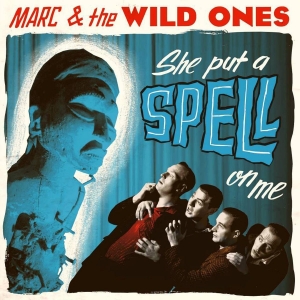 MARC & THE WILD ONES: She Put A Spell On Me

14 tracks, the second album of Marc & The Wild Ones - again powerful and wild Rockabilly at its best! Get also their first one called 'The Rockin' Beat' (CDRBR5686)! All songs except 'Honey Bun' are written by Marc Valentine, the singer of the band!A+ release and highly recommended!

Marc and the Wild Ones: the rockin' scene's best proponents of hair waving, hip shaking, beer spilling, foot stomping excitement, delivered with staggering confidence & youthfull bravado, earned by almost 3 years of crowd-inciting insanity. In a short period of time Marc & The Wild Ones have made their musical mark (stain?) in the roots rock crowd, first by thrilling German, Austrian, Belgium & Netherlands audience and now, after triumphant appearances at majpr European music festivals, such as the Rave and the High, that energetic WILD sound is finally getting around.

If you've had the good fortune to experience Marc & The Wild Ones on stage, you'll be gratified to know that their raucous, loose & "wild" rockabilly style is captured fully intact within this, their second full lenght recording for the Rhythm Bomb Label -14 terrific tracks of highly intensive 1950's rock'n roll (with a smashing cover of Larry Donn's "Honey - Bun") freshly eccented with driving piano rhythms and scorching saxaphone wails. Set the needle down into the groove and experience an exhilarating blast of late fifties rock & roll, garage rawkin' fewer, country-flavored rhythm, primitive electrified blues and unrefined authentic rockabilly.

Marc's vocals groan, growl & stutter across your ears, Rene weaves his six string spells with skill & ease, Andy lays a bold beat-down with a commanding double bass and Stefan holds nothing back as desperate jungle rhythms explode from his drum kit. The Wild Ones are no doubt a talented young band destined for increasing fame. This album is the musical proof that they're ready to bring their contagious sounds to an unsuspecting world.

You'll catch the "bop fever" in a hurry. Play this infectious LP and watch how quickly you succumb. First, your feet begin to twitch, and then beads of sweat form on your brow as your head begins to move back and forth with the beat. Your torso begins to shake uncontrollably as the music fully invades the body's nervous system. Arms sway to the beat, fists start to pump and your legs begin to stomp uncontrollably. Sanity is inevitably abandoned and at this point, there's no turning back! Why would you want to?