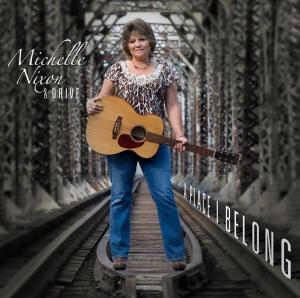 Michelle Nixon is no stranger to the stage when it comes to soulful singing. In fact, she and her band have been a household name among bluegrass enthisiasts for nearly a decade. The Virginia native won Female Vocalist of the Year from the Society for the Preservation of Bluegrass Music of America (SPBGMA) in 2006 and later that year was honored to be part of the Daughters of Bluegrass album, Back To The Well which won the International Bluegrass Music Association's Recorded Event of the Year. In 2009, The Daughters of Bluegrass took home the award again for the song, "Proud To Be A Daughter" from their follow-up album, Bluegrass Bouquet.

At the height of a successful career, Nixon suffered the devastating loss of her father to cancer that affected her deeply. Taking a long look at her busy career in bluegrass and realizing the effect it was having on her and her family, Nixon decided to take a hiatus from performing and focused her attention on her now 20-year marriage to fellow musician Nick and their three children, Tia, Chip and Trace. Now that her youngest child is nearing the end of high school, Nixon felt it was time to get back to bluegrass and the fans that she has missed so much. Word of a potential bluegrass come-back eventually got to Mark Hodges at Mountain Fever Records who recognized Nixon's talent and the void she left during her time off the road. "We are very proud to have Michelle Nixon join our family here at Mountain Fever," he states. "She and her band have worked really hard on this new CD, A Place I Belong, and it truly represents the wonderful place that Michelle is with her life and her music."

Nixon's band, Drive, is back by her side and includes her husband Nick Nixon on guitar and vocals; returning band member Patrick Robertson on guitar and vocals; Tim Newcomb on banjo; Mike Sharp on dobro; Jonathan Dillon on mandolin; and Tracy Burcham on bass. With this ensemble, Nixon has recorded 13 top-notch tracks for A Place I Belong; six penned by Nixon and her husband such as the well-received first single, "Your Kind Of Love", with noteworthy contirubtions from writers such as the late Harley Allen ("Last Road"), Earl Hess ("Too Blue"), Drive band member Patrick Robertson ("Brand New City", "Better Days") and Tom T. Hall ("Harper Valley P.T.A").

Recording Hall's "Harper Valley P.T.A.", a 1968 hit for country artist Jeannie C. Riley, was practically a no-brainer for Nixon. “When Tom T. was inducted into the Country Music Hall of Fame, it was a given that the legendary 'Harper Valley PTA' be performed as part of the ceremonial performance," explains Dixie Hall. "When it came to a choice of sassy, classy ladies to sing it, we made a very honest decision in Michelle Nixon. And, boy, did she sock it to ‘em! Ask brother Vince Gill – he lit up like a Christmas tree!” With the honor of being asked by Tom T. Hall to perform for such a prestigious event, Nixon just knew her version needed to be on the record.

The CD's first single, "Your Kind Of Love" has been well received by radio and fans alike, and A Place I Belong already sits at #3 on Airplay Direct's Top 50 Albums chart. Armed with a new band, new CD, and new website (www.MichelleNixon.com), Nixon is ready to hit the ground running and is excited and hopeful about her return to the stage and to radio. "This album sums up everything that's taken place in my life for the last few years," states Nixon. "With my husband by my side, a new CD and a new band, I'm very excited about working in bluegrass again. The response from my fans has already been so overwhelming and I know I've made the right choices in my life. A Place I Belong represents exactly where I am right now!"