Maurice John Vaughn - In The Shadow Of The City 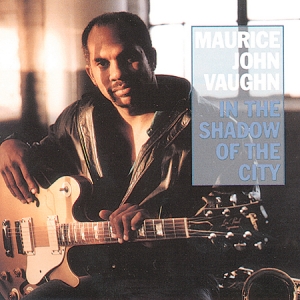 
Maurice John Vaughn is a true blues original. A triple threat on guitar, saxophone and vocals, Vaughn writes powerful, innovative and often humorous songs that spring directly from his vast musical experience. His soulful and passionate vocals are convincing because they are earned -- Vaughn means what he sings. Coming out of the streets of Chicago, Vaughn was raised on Muddy Waters and Howlin' Wolf, black Top 40 and James Brown. Like the greats who have come before him, he has incorporated his various influences into a blues and R&B style that is completely his own. In The Shadow Of The City, is a collection of mostly original songs covering all the emotional bases. From the good-time fun of “Can't Nobody” to the soul searching of “Suicide Is Not The Way,” Maurice displays his singular musical vision. He moves effortlessly from the full funk of “(Everything I Do) Got to Be Funky” to solo acoustic blues on “Treat Me So Bad.” According to Vaughn, it's important to mix things up musically and stylistically. "I don't want to be known as a 'heavy,'" Vaughn says, "but rather as someone who understands pain, can deal with it, and can also have a good time." His goal is to inspire his audience to do the same. In The Shadow Of The City showcases everything Maurice does best: sharp, original songs; soulful vocals; cutting-edge lead guitar and swinging saxophone.

Vaughn began his musical career while attending Juliet Low grade school on Chicago's South Side, playing drums, guitar and clarinet in the school band. He moved on to playing in various Top 40 cover bands. In 1968, he concentrated on the saxophone in order to join a local jazz trio. "They wanted a sax player, and I wanted to be in the band," Vaughn recalls. He made his very first recording with an R&B group called the Chosen Few for Chi-Sound records in 1976. But soon after that the saxophone jobs were drying up, so Vaughn turned his attention to his guitar. Echoes of Albert King, Albert Collins, John Lee Hooker and B.B. King can be heard in Vaughn's unique guitar style. In 1979, Vaughn entered the blues world after Phil Guy -- brother of legendary guitarist Buddy Guy and a guitarist and bandleader in his own right -- sat in with Vaughn's soul band which was playing behind Professor Eddie Lusk. After the gig, Guy invited Vaughn and band to join him for an upcoming Canadian tour. Soon Vaughn was playing with the top Chicago blues talents: Luther Allison, Son Seals (with whom he toured Europe) and A.C. Reed (whose Alligator recording, I'm In The Wrong Business!, features Vaughn on guitar).

Maurice's musical vision and self-guided career helped land him with Alligator Records. In 1986, Maurice played, produced, recorded and financed his own solo album. He was, as he says, "tired of waiting in line for producers to call," so he formed his own Reecy label, and released Generic Blues Album. On the strength of this recording, Alligator president Bruce Iglauer invited Vaughn into the studio to cut a track for The New Bluebloods compilation album. Alligator then worked out a distribution deal for Generic Blues Album with Maurice, reissuing the album with an additional track. Guitar World declared, "Blues album of the year!"

As well as writing up-to-the-minute urban blues songs, Vaughn loves to perform. A typical Vaughn show involves a close rapport with the audience. His style is comfortable and inclusive. He'll talk to the audience as if they were all sitting in his living room. "You won't just see me stand there with my guitar," Vaughn says. One way he has learned to keep his live show fast paced and always fun is by playing for kids. Vaughn often plays in schools for children who have never heard blues music. He'll update Sonny Boy Williamson's Help Me to include lyrics about homework. "Kids have short attention spans, so I need to keep things fun and exciting or I'll lose them. I always keep this in mind when I'm performing in clubs."

Vaughn loves to travel and is constantly updating his sound and style. His abundant talent and experience place him at the forefront of the contemporary blues world. His innovative songs, passionate singing, blistering guitar playing and romping saxophone mark his music as visionary work from a true blues original.