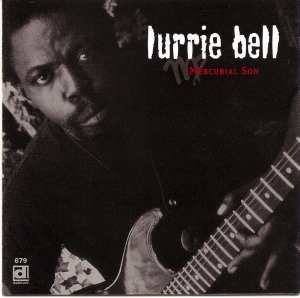 Lurrie Bell, born in Chicago in 1958, has led a life immersed in the blues. Son of a bluesman and an original member of the Sons of Blues with Freddie Dixon and Billy Branch, Lurrie has never been mercurial about his devotion to the blues. This is Lurrie’s first recording as a leader, featuring special guest Big Time Sarah.

In my opinion, this is by far Lurrie Bell’s most exciting and interesting recording of his amazing life long
blues career. 1995’s Mercurial Son was Lurrie’s first
Delmark recording and first domestic release as a
leader, after a JSP debut from London in ’89. Lurrie
started recording as a featured sideman/lead guitarist when he was just a kid at 19 in ’77 with his legendary father, the late harmonica ace Carey Bell (on
Delmark’s Heartache and Pain) and with his godfather, Eddie C. Campbell on his ’77 debut (the classic King of the Jungle,) as well as many other recordings, including with famous relatives Eddy Clearwater
and pianist Lovie Lee, as well as forming the Sons of
the Blues with today’s best Chicago harp player, Billy
Branch! Today, after many years of psychological
problems and personal setbacks, Lurrie thankfully
has amazingly turned his life around and has his
head together to become today’s premier bluesman,
more popular than ever, and multiple national blues
music awards.
Lurrie was not in a good place at the time of this
recording (nor for years before and after this, either.)
If you don’t know Lurrie, it is very difficult to describe
on paper because of the emotional depth this real
life blues story carries. He is the BLUES—he grew up
with it, and it is still all around him, as he painfully
declares in “Blues Is All Around Me, follows me
everywhere I go, if I can’t find my way outta here, I
sure don’t want to live no more.” For many years,
Lurrie struggled with mental demons and drug
issues, which led to very erratic behavior, which obviously also drastically affected his playing. During
these dark years, Lurrie would “get stuck” playing, or
wasn’t able to play at all, and put on painful to watch
performances more often than not. But when he was
on, nobody could touch him. I have never seen other
musicians’ heads snap to attention so fast when
Lurrie was on. It was simply the definition of a jaw
dropping performance.
Mercurial Son reflects the state of mind Lurrie was
in at this time; extremely dark, intense, disturbing,
fascinating, and very different than anything I have
ever heard. He was often on the edge of falling apart,
but somehow pulled it together to end up with a
thrilling result. And I must let you know that Lurrie
may not even remember it (or want to.) I used to ask
him to play some of the wild originals from this (like
“Your Daddy Done Tripped the Trigger” and “Lurrie’s
Hipshank”,) and he would look at me completely
blankly, and then rip into another unique take on a
Chicago Blues standard, or even better, a killer version of “Cleo’s Back!”
Very influential on this recording were producers,
world renowned blues scholars, Steve Cushing
(Blues Before Sunrise blues radio host and vastly
underrated drummer) and Scott Dirks (author of Little
Walter bio among others, and fantastic harp player.)
Steve Cushing wrote many of these wildly haunting
and menacing originals and provided the “complex,
yet primal sounding rhythms,” on drums providing
somewhat of an African, Bo Diddley beat along with
the late Chicago bass legend, Willie Black, and with
Lurrie’s intertwining lead and rhythm dark deep funk
blues guitar.
This is from the original liners from well respected
local writer/blues historian/bassist, Justin O’Brien
“The music of Mercurial Son is stream of Lurrie’s consciousness. It is wild. It is rudimentary in its primordial groove. It is celebratory. It is dark and portentous.
It is brilliant. It is playful and even hilarious. It can be
nearly incoherent and it can be raunchy. And it can
also be lucid and beautiful. It’s frightening and it’s
thrilling. It’s strange and it’s wonderful.” I agree!