Lowell Levinger - Get Together - Youngbloods Classics 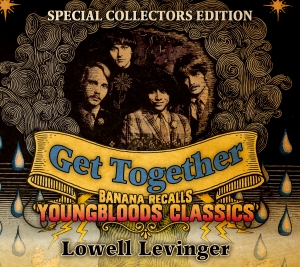 “Get Together”
Banana Recalls Youngbloods Classics


GET TOGETHER - Banana Recalls Youngbloods Classics is an exciting new look at the Youngblood’s most popular songs, rearranged and recorded with new life by Lowell Levinger with guests such as Jesse Colin Young, David Grisman, Ry Cooder and a host of others. Levinger, one of the original founding members of the band along with Young has infused this release with the same eclectic, fun-loving energy that the Youngbloods put into their shows. This Collectors Edition is guaranteed to inspire a new generation and some old fans to embrace the magic created in those Youngblood years. Ironically “Get Together” is just as relevant today as it was when it was released a half century ago while the Vietnam war was raging, considering the amount of divisiveness in our country and the world today.  When Lowell plays the song at gigs, people sing along to the chorus whether in California, Kansas, Italy or England, as it still resonates with listeners who hope to have a better world.


Good times start the record out with “Grizzly Bear” and some jovial banter between Jesse and Banana.  Then we move from the groove of “Supersonic Transport” into a powerful version of “Darkness Darkness” with Ry Cooder and Darol Anger building on each others licks.  Two Youngbloods instrumentals are included that are always crowd favorites; the banjo and bass duet “Interlude” and a baroque flavored rendition of “On Sir Francis Drake” with Banana playing piano and Carlo Aonzo on classical mandolin.

On the Youngbloods million seller “Get Together” Banana has gathered some dear old friends to form a “Grand Chorus” including Maria Muldaur, Dan Hicks, Peter Rowan and a bunch of other notorious characters.

From good old jug band carousing to straight-up bluegrass to baroque piano and mandolin to the ‘anthem of the 60s’ - “Get Together” this release showcases the very best of what Levinger and the Youngbloods legacy can offer.

It’s now the 50th Anniversary of the founding of The Youngbloods in 1965 with Jesse Colin Young, Banana, Joe Bauer and Jerry Corbitt. Banana played a variety of instruments in the group from the first gig to the last one in late 1973. Since then, Levinger has enjoyed a rich musical life. Perhaps his longest engagement was touring worldwide with Mimi Fariña for over 20 years and he has been performing for Bread and Roses on a regular basis for 40years..  But Banana has also served as one of The Knockouts with Norton Buffalo, was the lead singer and keyboardist for Zero for over ten years and has played many gigs with Dan Hicks, David Grisman, Ramblin’ Jack Elliott,  Peter Rowan and many other notable artists.  Banana tours Europe and the UK regularly as a solo act, enjoys playing with his hometown band in Northern California and is currently booking gigs here and abroad in support of his new CD.
2
What's This
Advertisement