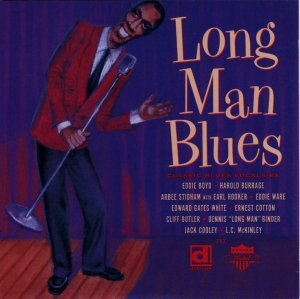 United Records and its sister imprint States had one of the most varied blues talent rosters of any Chicago label during the early-to-mid-1950s. Long Man Blues spotlights 70 minutes of superb United/States rarities.

United Records was the first successful black-owned record company. Operated by Leonard Allen, tailor, retired policeman and obviously one of exceptionally wide taste in music, the two labels (United and States) issued some of the best performances in the jazz, blues, gospel and R&B idioms between 1951 and ’57. Delmark is proud to release this important body of masters, including many previously unissued, recorded in studios which pioneered high fidelity recording in the ’50s.

Special thanks to Victor Pearlin and George Paulus for providing information from original 78s.