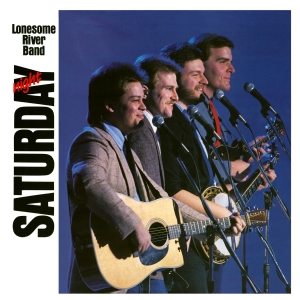 This is the Lonesome River Band's second of four albums recorded on the Rebel label between 1986 and 1992. The group organized in 1982 and had a self-released recording in 1985. They signed with Rebel the following year and scored with their self-titled debut recording for the label (REB-1645). The band was praised for “figuring out the formula for success in contemporary bluegrass: solid picking, good lead and harmony singing, well-constructed arrangements, carefully chosen material and a lot of hard work.”

Saturday Night, Sunday Morning, as the title implies, is material that is divided equally between bluegrass and gospel music. A highlight record review praised Steffey for his “flawless authority,” especially on the mandolin tour-de-force “Daybreak in Dixie.” Also noteworthy was the LRB’s artful juxtaposition of old styles of bluegrass and new. Traditional chestnuts, like the Carter Family’s “Lover’s Lane,” Carl Story’s “Light at the River,” and the more recent “Kentucky Girl” (a la Larry Sparks) were right at home when paired with newer compositions such as “Close the Door Lightly When You Go,” “It Won’t Be Like Cheating,” and “Lost and Lonesome For You.” Nashville-based musician Steve Thomas provided excellent fiddle work on a number of the songs.
10
What's This
Advertisement