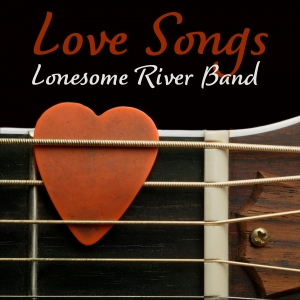 Though it’s known as a genre filled with sad, lonesome songs — ”plumb pitiful” is a phrase often heard — it’s nonetheless true that bluegrass music, like classic country, has room for the occasional wry, self-deprecating song about lost love, too. And when an artist like the award-winning Lonesome River Band gets hold of a deftly written one from the pen of a favorite writer, what emerges is a song that can bring a rueful smile to the face of a listener, even as their foot surrenders to an irresistibly feel-good beat.

Written by Adam Wright, who’s found equal favor with country, Americana and bluegrass artists and audiences, “Love Songs” depicts a frustrated songwriter who just can’t write the happy love songs the market demands — because, as the eminently catchy chorus notes, “They say write in what you know, And all I really know is the losin’ and the leavin and the left.” Sung by Lonesome River Band guitarist Brandon Rickman, who perfectly captures the mood of wistful resignation, it’s an amusing slice of humor that nevertheless works on multiple levels, and rings true on each.

“‘Love Songs’” is another great song written by our friend Adam Wright,” says band leader Sammy Shelor. “It tells the story of a songwriter who has had bad experiences with love and can’t find ways to be positive about it. Adam puts a comedic twist to selling sad songs, and Brandon portrays it in his unique way.”

Still, as clever as the song itself is, it’s ultimately the quintet’s smooth, yet driving recording that makes “Love Songs” such a satisfying record. From the instantly recognizable banjo kickoff from Shelor — a recipient of the Steve Martin Prize for Excellence in Bluegrass and Banjo and a multi-year recipient of the International Bluegrass Music Association’s Banjo Player of the Year — through brisk, energetic solos by mandolinist Jesse Smathers and veteran fiddle player Mike Hartgrove, and a strong yet polished vocal trio of Rickman, Smathers and bassist Barry Reed, this is Lonesome River Band at its best, surrounding the melody and lyric of a well-written song with its signature blend of power and finesse.

Remarkably, this is a group that’s closing in on the 40th anniversary of its founding, and on the 30th anniversary of its groundbreaking Carrying The Tradition, a project that catapulted the LRB into the ranks of the most influential groups in bluegrass music’s history. Today, one listen to “Love Songs” is enough to tell every listener that this is one band unwilling to rest on its laurels — and with a lot more music still to come.