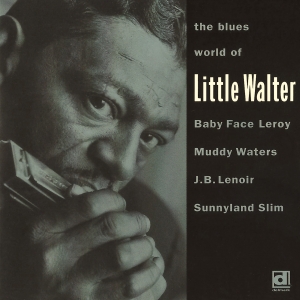 In 1950-51 there was a new generation of bluesmen whose evolving music synthesized the raw power of the Delta blues, the amplified energy of electric instruments and the bold tempo of the ghetto streets. Little Walter was just 19 years old, Baby Face was 26 and Muddy Waters was 34. The Parkway session presented here failed to produce any chart records, but did generate a wild, romping collection of down-home blues that has achieved legendary status through various issues and reissues. Of course Little Walter would soon emerge as the world’s premier harmonicist and scale the heights of blues stardom. He will be remembered as a true blues genius in the same category as Muddy Waters, Howlin’ Wolf and very few others. Amazingly, The Blues World Of Little Walter is the first time all eight sides have been issued together as well as the first time they’ve been released utilizing the original masters as the source material, now digitally restored.

"If you really want to hear what Little Walter sounded like in his pre-amplified days and early stages of development with the Muddy Waters band, this is the one to get. The title is a bit of a misnomer as Walter is featured more as a sideman to Baby Face Leroy, Muddy Waters and others on early Parkway, Regal and Savoy sides, but it's clear that Walter at this stage of the game should have been paying royalties to both Sonny Boys and Walter Horton in particular. One of the high points features explosive slide work from Waters on a pre-Chess version of "Rollin' & Tumblin'," as crude as a version as you'll ever hear and certainly not to be missed. Although many of these sides have appeared on other compilations (usually taped up off of old scratchy 78s), this one features superior sound taken from the original lacquer masters."- CUB KODA - ALL MUSIC REVIEW