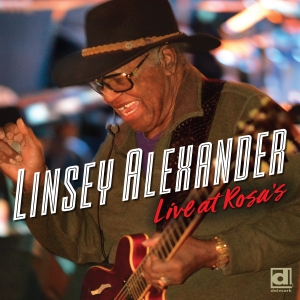 LINSEY ALEXANDERis a classic Chicago bluesman, and has been a fixture on the blues scene since he arrived in 1963. He was born on July 23rd, 1942 in Holly Springs, Mississippi. Linsey learned to play the guitar at an early age — around 12 years old— after he had moved with his mother and sister to Memphis, Tennessee. Linsey has played with some of the most legendary bluesmen in history; B.B. King, Magic Slim and even Mr. Buddy Guy himself to name a few. His playing is straight forward and to-the-point, he turns his amps up and lets it fly. He is serious about the music. He has a great time at each show, making sure everyone is entertained. I was introduced to Linsey several years ago, by Buddy Guy’s guitarist Ric Hall, at one of Chicago’s historic blues venues...The Kingston Mines. It was a cold winter night, but Linsey was on fire! Linsey was walking through the crowd, stopping at each table to sing to everyone in the house. The Hoochieman knows how to work the room, and I can tell you everybody loves it. Linsey is one of hardest working Bluesman in Chicagoland. You can catch him playing almost any night of the week. Whether he’s headlining at a local blues club, or doing an acoustic set somewhere, you’re sure to catch him live around town. This show was recorded at Rosa’s Lounge, on the northside of Chicago, in May 2019. Linsey was in rare form, and ready to deliver. The setlist consists of several originals by Linsey, as well as songs by notable artists including Junior Wells, Freddie King and B.B. King and Latimore. The first track on the album is “Please Love Me” which Linsey says is a tune by B.B. King. Great opening song, with some killer keyboard action on it. The second song is an original by Linsey titled “My Days Are So Long” from his 2006 album of the same name. Track three is a classic blues jam by Freddie King titled “Have You Ever Loved A Woman”. The second longest track on the album, it’s a stone-cold killer blues piece, filled with some beautiful guitar work. Linsey’s vocals and guitar playing are spot on. Track number four “I Got A Woman” is another original by Linsey, from his album Come Back Baby. It’s a funky cool groove that will get you up on the dance floor for sure. Track number five is another Linsey original titled “Goin’ Out Walking” that has a Texas Boogie vibe to it. Track six is a Latimore song titled “Somethin’ ’Bout ’Cha” which has a slower Blues classic sound. Linsey’s vocals are on point here, and the song has an old school feel to it. Also from the album Come Back Baby, track seven “Snowing In Chicago” is one of my personal favorites. From the opening riff to the classic hook, this is a fan favorite! Track eight is a blues jam from Junior Wells titled “Ships On The Ocean”. It is also the second longest song on the album, clocking in at 8:35. This is Chicago Blues at its finest right here. The last track on the album is “Going Back To My Old Time Used To Be”. Linsey says the riff came from his son Nick Alexander, who is also a very accomplished guitar player in his own right. The fruit didn’t fall far from the tree! LINSEY’S BAND THESE TWO NIGHTS IN MAY 2019 INCLUDED: Sergei Androshin(guitar), Ron Simmons(bass)–who has been with Linsey for over 40 years–Roosevelt Purifoy (keyboards), “Big” Ray Stewart(drums). Support live blues music and help us in Keeping The Blues Alive in Chicago and all over the world! —DJ MIGHTY QUINN • BUDDY GUY RADIO


Linsey Alexander is a true bluesman, a great artist, and a mentor to so many. He already has three albums on Delmark. His fourth has been recorded during two live shows at the legendary Chicago blues club, Rosa’s Lounge. The highly praised record “All Your Love, I Miss Loving: Live at the Wise Fool’s Pub Chicago” (DE-781) by Otis Rush was Delmark’s reference for the production of Linsey’s new project. Otis’s live album represents an ultimate example of an authentic blues album and moment. On that path, for Linsey’s new live album “Linsey Alexander Live at Rosa’s” the Delmark team of Julia Miller, Elbio Barilari and Steve Wagner aimed for the alloy of an updated, big modern sound with a classic concept, energy and warmth which conveys what Linsey and his band unchain on the stage. Continuing the Delmark legacy of great live recordings, this album is a milestone for Linsey Alexander’s career.

Born in Mississippi and raised in Memphis, Tennessee, Linsey Alexander discovered a down to earth city that truly understands and appreciates music on Chicago's southside. In much the same way as many great blues artists before him, he grew up in a poor but honest and hard working family, learning early on that music has the power to lift the spirit and comfort the soul. In Linsey's own words, "Blues is not hard- it's just a documentary about life." His first guitar - a gift from a family friend who played on the front stoop of Linsey's home in Memphis - was never retrieved from the pawn shop where he left it almost 50 years ago. Using the money to help pay his way to Chicago, he now plays a variety of Gibson and Fender guitars. Since 1959, Linsey Alexander has been perfecting the art of entertainment blues for the sheer and simple pleasure of it. His easy smile and unpretentious personality define a charismatic entertainer who loves to perform; and perform he does!

Although having played with B.B.King, Bobby Rush, Buddy Guy, Little Milton, Magic Slim, Johnnie Taylor, A.C.Reed, Larry McCray, Bither Smith, John Primer, Otis Clay, Eddie Clearwater, and other great blues performers, Linsey Alexander has remained resolutely true to his own style. His earlier CD's released, "Someone’s Cookin' in My Kitchen," "My Days Are So Long," and "If You Ain't Got It" are all three compilations of original Blues and R&B tunes.

Alexander has been to 10 countries and all across America spreading the joy of blues.

He is thankful for the good things in his life, and now at last, seems willing to realize that the friends that encouraged him to keep playing over the years may have known a thing or two about talent. Linsey has "never truly believed in himself" until now; Now, he is ready to believe. In 2012, He signed with Delmark Records and recorded his first international CD, "Been There, Done That."

"Two Cats" from 2017, where "Linsey weaves his colorful stories throughout this album of blues, soul, R&B, and funk. It’s great fun and serious music at the same time. `Cause the blues don’t mess around and neither does Linsey."

Linsey Alexander was inducted into the Chicago Blues Hall of Fame June 8th, 2014.