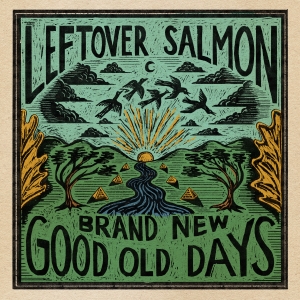 Known for their exhilarating live shows and musicianship as well as their eclectic musical tastes, Leftover Salmon has been one of Colorado’s most beloved musical exports, picking up where bands like Little Feat, the Band and The Grateful Dead left off and distilling it into their own potent brew of bluegrass, rock ‘n’ roll, folk, Cajun, soul, zydeco and jazz and blues. As Tim Newby, author of Leftover Salmon: Thirty Years of Festival!, wrote “When listening to Leftover Salmon it is easy to draw a line that runs straight from Bill Monroe to John Hartford to the Grateful Dead to Hot Rize to Little Feat to New Grass Revival to Col. Bruce Hampton and end with Leftover Salmon.”

Leftover Salmon’s new album BRAND NEW GOOD OLD DAYS will street on May 7 on Nashville indie label Compass Records, which released their 2002 album LIVE, as well as three solo projects for lead singer/mandolinist Drew Emmitt. The album will be released on CD, digitally and on limited-edition blood orange vinyl.

The album kicks off with the band’s Salmonized version of Soundgarden’s “Black Hole Sun.” Emmitt says: “Black Hole Sun” has always intrigued me with its haunting lyrics and very cool chord progression. I also felt like it was appropriate for this crazy time we’re in and that it would make a great bluegrass tune.”

The second song is the title track, “Brand New Good Old Days.” It’s a catchy, instantly memorable song that feels like it’s been out there for years and encapsulates the band’s sound. The track is a perfect example of Leftover Salmon’s genre bending sound which has influenced an entire generation of today’s bluegrass-rooted jam bands, including Yonder Mountain String Band and Trampled by Turtles. It also delivers the timely message to live in the moment.

“It’s a reminder that no matter what kind of trouble we’re in these days, it may not ever be as good as it is right now,” says co-founder Vince Herman.

Leftover Salmon have been considered the architect of what has become known as “jamgrass,” a band that has endured through musical fads and labels to maintain a vibrant, relevant and influential voice in the music world. Over that time, their sound has grown and evolved while staying true to the roots and guiding spirit of the band’s founding members – Drew Emmitt and Vince Herman.

Having collaborated with everyone from the cream of American roots artists (1999’s groundbreaking NASHVILLE SESSIONS) and indie oddballs Cracker, to more recent albums produced by Los Lobos’ Steve Berlin, the group has endured the death of a founding member and line-up changes yet managed to stay true to their fans and their sound.
34
What's This
Advertisement