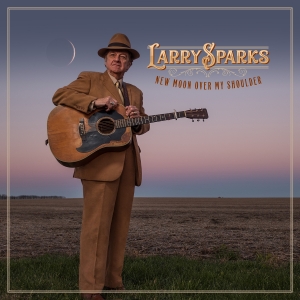 Despite his status as one of bluegrass music’s top headline artists, as an elder statesman, and as an inductee to the International Bluegrass Music Association’s (IBMA) Hall of Fame, Larry Sparks is an under-recorded entity. It’s been five years since his last studio album, the 50th anniversary Lonesome and Then Some. Some things are worth the wait and such is the case with the brand new New Moon Over My Shoulder.

Larry’s new album commemorates another career milestone. While Lonesome and Then Some marked his 50th anniversary as a professional musician, New Moon Over My Shoulder coincides with the fifth decade of Larry as the band leader of his Lonesome Ramblers. He formed the group in 1969 after a successful three-year run as the lead singer for Ralph Stanley.

A nod to Larry’s former boss can be found in a new recording of the song “I Only Exist,” arguably one of the best songs that he cut during his tenure with Stanley. The new disc also contains fine examples classic country songs that sparkle under the glow of Lonesome Rambler treatment. “Down in Union County” is a seldom-heard Roy Acuff – the king of country music – staple that dates back to the late 1930s while cowboy film star Gene Autry was Larry’s inspiration for the album’s title track.

Striking an artful balance is a bevy great new songs. “Take Me Back to West Virginia” is a nostalgic longing for home that rivals Larry’s other “state” songs (“Tennessee 1949” and “Blue Virginia Blues”). Gary Ferguson and Shane Sullivan penned “Henry Hill,” a musical narrative that encapsulates a Confederate soldier’s hopes and fears during the 1861 battle of Manassas. “Annie’s Boy,” written by Bill Castle, puts a different face on armed conflict by tracing a mother’s love for her boy as he journeys from nursery to high school, to a train that takes him off to war, and his final return on an airport tarmac draped in red, white and blue.

In response to fan requests for several gospel favorites that were not currently available, Larry offers fresh interpretations of “New Highway” and “Green Pastures in the Sky.”

The Lonesome Ramblers appearing on New Moon Over My Shoulder are – like the songs – a mixture of tried-and-true and new. Michael Feagan has fiddled with Larry Sparks for over a decade and lists Father of Bluegrass Bill Monroe as a former employer; Ron Stewart is a former IBMA fiddle AND banjo Player of the Year; and bass player Matthew Madden has a long history with Larry Sparks. Adding youthful perspectives are newcomers Jeff Clair and Evan Wilson who both share mandolin duties.

Larry Sparks proves – once again – that he is a consummate bluegrass performer. It’s all here: soulful singing, riveting guitar work, an engaging selection of songs, and deft instrumental and vocal backing by one of the best groups in the business. New Moon Over My Shoulder is a new Sparks’ classic!