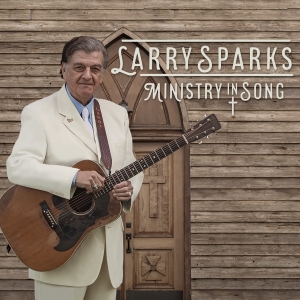 Bluegrass emanates from the heart of Larry Sparks. Gospel music bounds from his soul. Paired together, bluegrass gospel represents the very best of Larry Sparks as a singer and as a man. In Sparks’ latest chapter within his massive catalog of classics, Rebel Records’ Ministry In Song, the bluegrass Hall of Fame member sings as well as he ever has during his six decades in music. Throughout the album’s 12 numbers, Sparks’ soul beams through his gift of a voice as if, yes, indeed, he has seen the light.

Songs chosen to echo life’s hills and valleys dominate Ministry In Song. He opens with one of four Daniel Crabtree compositions included on the album, the bluegrass speedster “Don’t Take Your Eyes Off of Jesus.” Ron Stewart’s vigorous fiddle sets the table, from which Sparks’ glowing warm voice projects to move all who hear.
His voice maintains tempered and tones throughout the album. For instance, his eminently powerful take on Hank Williams’ “House of Gold” qualifies as an understated masterpiece. Augmented by John Rigsby’s stately though humble harmonica, Sparks tip-toes through the Drifting Cowboy’s perspective-steeped number with equal parts homage and heart.

Thematically, Sparks establishes a tone of unbending resilience. Eternal reward, he relates in the mid-tempo “Where We’ll Never Say Farewell,” exists for us all. We need but call upon “King Jesus.” Just “call him up, call him up by his name,” Sparks sings in the giddy-up-go gospel thumper.

But we’re human. Believers or not can listen to, appreciate, and fall deeply in love with Ministry In Song. For example and as conveyed in Daniel Crabtree’s “Holdin’ On,” Sparks delivers a plaintive note of understanding. When we fail to understand our “toils and trials,” there’s one, he sings, who does.

That’s Larry Sparks. When he sings, as on the heart-wrenching “Thank You Lord,” people listen. How could you not? As from his own pen with “Lord, Show Me the Way,” gospel truth permeates. These are songs of joy to be enjoyed. They are also songs of comfort from which we can gather hope. For instance, Sparks’ hushed rendition of Jimmie Davis’ “Someone to Care” emphasizes that hope exists for one and all. Paired with Davis’ “To My Mansion in the Sky,” Sparks’ voice ebbs and flows with assuredness with lyrics that leave no doubt as to what he believes.

Don’t misread Larry Sparks’ Ministry In Song. Lessons for life, odes of love – Ministry In Song stands as a testament of truth that’s open to everyone. Musically taut, lyrically sound, Sparks leads the way with a torch of traditionalism lit firmly in hand, heart – and that timeless voice.
26
What's This
Advertisement