Larry Sparks - Christmas In The Hills 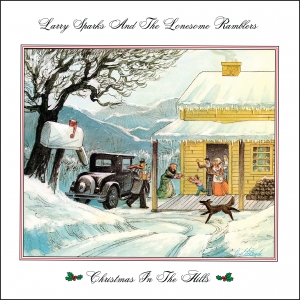 
The original 1976 LP release of Larry Sparks and The Lonesome Ramblers' Christmas In The Hills on King Bluegrass #559 contained songs written especially for the album by Larry ("It's Christmas Time") and banjo player Tommy Boyd ("Christmas Memories"). The 1997 reissue on Rebel-CD-1745 included two new compositions by noted bluegrass songwriter Bill Castle: "The Birthday of Our King" and "Christmas in the Mountains"

This compilation consists of recordings made two decades apart by Larry Sparks and two different configurations of The Lonesome Ramblers; but the essential sound is the same, tied together by Larry's unmistakable voice and dynamic guitar playing. Tim Duran and Scott Napier both complement the ensemble with their mandolin work, as do Tom Boyd and Jim Britton on banjo; the years that separate their performances disappear as their contributions mesh perfectly with the group sound.
28
What's This
Advertisement