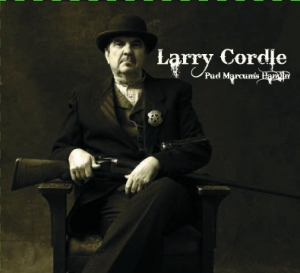 
PUD MARCUM'S HANGIN'
The much-anticipated new recording from award-winning songwriter and artist Larry Cordle is set to be released on March 15, 2011. Entitled Pud Marcum's Hangin', the self-produced project is the first to be released on Cordle's own label, MightyCord Records.

Pud Marcum's Hangin' strays a bit from Cordle's standard bluegrass format in that these arrangements tend to be simpler, more stripped down. A couple of tracks incorporate drums and steel, and even Buck White's piano is included on one. The result is a CD that masterfully maintains one foot in the bluegrass field while simultaneously straddling the fences of Americana and country. With that in mind, three singles will be released to radio via Airplay Direct this Friday, February 11th, and suggested for each of the aforementioned markets, though any station may download what they please. For country fans, Cordle offers his own expressive version of a song first recorded by country star Trace Adkins in 2008, "Sometimes a Man Takes a Drink." The lighthearted "Uncle Bob Got Religion," with its culminating Pentecostal breakdown chorus, leans toward a more rootsy edge definitive of the Americana crowd. Last is the title track, which vividly recounts a true story and features bluegrass icon Del McCoury's unmistakable tenor.

"This is a collection of songs that has taken me 25 years to compile," Cordle explains. The creator behind such legendary hits as "Highway 40 Blues" and "Murder on Music Row" goes on to clarify, "All are new in that I have never recorded any of them before, and, while some have been written since my last disc, some are just things that I never got around to recording."

In addition to McCoury, several other special guests are heard throughout the 13 songs. A few include frequent co-writers and fellow hitmakers, Carl Jackson and Jerry Salley, yet another hit songwriter and acclaimed bluegrass artist in his own right, Ronnie Bowman, Richard Sterban, of the Oak Ridge Boys, and renowned musician, artist and producer, Randy Kohrs, who recorded a large portion of the project at his own Slack Key Studio, and mixed it, as well.

"I co-wrote all the compositions on this project, something I have not done since 1992," Cordle says. "They are, by and large, Appalachian stories, some funny, some tragic, some fact, some fiction, and all from the heart of my talented co-writers and me. I hope everyone finds something here that they can relate to and enjoy."


LARRY CORDLE BIOGRAPHY
Larry Cordle was born and raised on a small family farm in eastern Kentucky. While a young child he was introduced to bluegrass, country, and gospel music, by his great grandfather Harry Bryant, an old time claw hammer banjo stylist, fiddle player and dancer. He recounts, “mom said I could sing “I’ll Fly Away”, all the way through when I was 2”! Cordle fondly remembers this early influence by pointing out, “we lived so far away from everything, that we had to make our own entertainment. Papaw would get the fiddle out in the evenings sometimes and play and dance for us. Just as soon as I was old enough to try to learn to play I did so & kinda seconded after him on the guitar.

He ran an old country store and I spent many happy hours in there with him playing, talking about and listening to music. It was our escape into another world, something we grew up with and looked so forward to. I was always happiest when we were in a jam session”.

East Kentucky was not only home for Larry, but also for his childhood friend and neighbor, musical prodigy, Ricky Skaggs. Upon hearing Larry’s new song, “Highway 40 Blues”, Ricky promised that he would one day record it. In the summer of 1983, it was the number one song in the nation, helping to launch Larry’s songwriting career and skyrocketing Skaggs’ already solid country music career.

In 1985, at Ricky’s urging, Larry, by now out of the accounting business and back playing nightclubs again, gave up the security of a full time gig to move to Nashville and become a staff songwriter for Ricky’s new company, Amanda-Lin Music, with whom he (Ricky) had wisely partnered, with Lawrence Welk’s mega successful publishing company, Welk Music. “$200 bucks a week Cord laughs, that wouldn’t go far these days but I made myself a promise that if I ever got a chance, one foot inside the door, that I was gonna work my behind off, as hard as I could to stay inside of it. I met people there at Welk… Jim Rushing, Carl Jackson, Lionel Delmore, Johnny Russell, Dickey Lee, Bob McDill, countless others, and learned what it was gonna take to be a ‘real’ songwriter from them.
They taught me the ropes and I had the talent God gave me, some incredible luck and much love, help and encouragement from my peers and my family.

At last count, Cordle’s songs had appeared on projects that had to date sold a combined total of more than 55 million records, by artists such as Skaggs, Alison Krauss, Rhonda Vincent, Garth Brooks, George Strait, Trisha Yearwood, Reba McEntire, Diamond Rio, Alan Jackson, Trace Adkins and many others.

Lonesome Standard Time is comprised of seasoned, esteemed musicians in their own right, providing Larry with an outlet to feature his original material, trademark singing and his engaging personality, immediately connecting fans to his music.

In addition to his songwriting and role as a bandleader, Cordle is sometimes featured as a lead and/or background vocalist on some of Nashville’s most awarded and popular music. He’s provided harmony vocals for artists such as Garth Brooks, Blake Shelton, Bradley Walker, Billy Yates, Rebecca Lynn Howard and co-writing pal, Jerry Salley. His lead & harmony singing is featured on Livin, Lovin, Losin: A Tribute to the Louvin Brothers, which won a GRAMMY for Best Country Album in 2003 and was named recorded event of the year by IBMA in 2004. He’s also featured on two tracks of Moody Bluegrass, alongside artists such as Tim O’Brien, Alison Krauss, John Cowan, Harley Allen et al and is recently featured as lead vocalist again on Moody Bluegrass II.

Cord remains extremely active in all facets of his career. He regularly records, and tours in the US and occasionally abroad with Lonesome Standard Time. Larry is also still first and foremost a songwriter, now writing independently for his own company, Wandachord Music, BMI.

Larry is a long time resident of Nashville suburb, Hendersonville, Tennessee. He makes his home there with wife Wanda, and their daughter, Kelvey Christine but still enjoys the opportunity to make frequent trips back to his East Kentucky home place and his roots.

For more information, visit http://www.larrycordle.com/ and find him on Facebook at http://www.facebook.com/larrycordle/
102
What's This
Advertisement