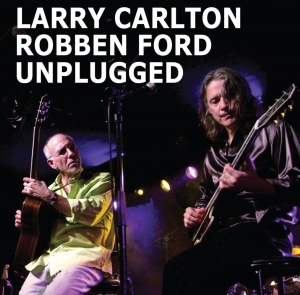 The New Morning club in Paris presents the incredible - and long awaited - pairing of two guitar giants for their first Unplugged show. Imagine: Larry Carlton and Special Guest Robben Ford, two legendary guitarists... one stage unplugged... a guitar lover’s dream! This unique pairing of two all-time great guitar legends delivers an unforgettable evening of dueling guitar solos and an uncompromising evening of The Blues performed the way it was meant to be.
Nineteen-time GRAMMY NOMINEE, four-time GRAMMY WINNER and all-time guitar great, Larry Carlton established himself from his first recording, A Little Help From My Friends. His studio credits include musicians and groups like Steely Dan, Joni Mitchell, Michael Jackson, Sammy Davis Jr., Herb Alpert, Quincy Jones, Bobby Bland, Dolly Parton, Linda Ronstadt and literally dozens of others. He went on to perform with the Crusaders and then with the multi platinum jazz super group Fourplay. With more than 30 albums to his credit and having performed on over 100 albums that have gone Gold or Platinum, Larry Carlton has set a standard for artistry that spans three decades.
Joining forces with Larry in Paris is Robben Ford who at 18 he was playing with the likes of Charlie Musselwhite, Jimmy Witherspoon, the L.A. Express with Tom Scott, George Harrison, and Joni Mitchell. He was a founding member of the Yellowjackets, then went on to tour with Miles Davis, Sadao Watanabe, and Little Feat. In 1992 he returned to his roots: the blues - a genre he masters in most exquisite grand style.
13
What's This
Advertisement