Little Charlie & The Nightcats - All The Way Crazy 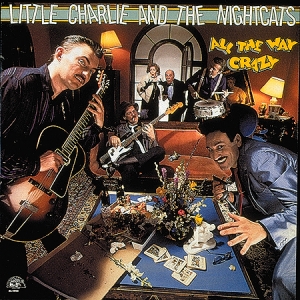 With each new Little Charlie & The Nightcats release, it becomes increasingly clear that not only are these cats great musicians, but also that Rick Estrin is a songwriter of unparalleled skill. His songs stand shoulder to shoulder with those of Willie Dixon and the songwriting team of Leiber and Stoller. Estrin won the 1993 Blues Music Award for his composition, “My Next Ex-Wife” and has written songs for a growing legion of famous fans. Three of his songs found their way onto Grammy-nominated albums: “Don't Put Your Hands On Me” (from Koko Taylor's Force of Nature), “I'm Just Lucky That Way” (from Robert Cray's Shame + A Sin), and “Homely Girl” (from John Hammond's Trouble No More with Little Charlie & The Nightcats serving as his backing band). Other artists who have covered Estrin songs include Little Milton, Rusty Zinn, Kid Ramos and Mark Hummel. "I like songs that tell stories," he says, "songs that are well-crafted and meaningful." Besides Dixon and Leiber and Stoller, Estrin cites Sonny Boy Williamson II, Percy Mayfield and Baby Boy Warren as his major songwriting influences.

Matching Estrin's prowess lick for lick are Baty's wild, seemingly impossible guitar excursions. From jazz to blues to rock to surf, Baty has all the styles mastered. He seamlessly blends various elements into a guitar sound that is his alone. Guitar World declares, "Baty's straight blues playing is eye-popping...he stretches solos to the breaking point, skittering on the edge, where one wrong note will bring the whole thing crashing down." "Little Charlie Baty plays as much guitar as Eric Clapton and Buddy Guy put together," raves The Village Voice. "He is one of the swiftest, most fluent guitarists working in any genre." Rounding out the Nightcats are drummer J. Hansen (who's been with the band since 2002) and bassist Lorenzo Farrell (who joined in 2003), both veterans of the Bay Area's Steve Lucky and the Rhumba Bums. Hansen, who has also toured with members of the Preservation Hall Jazz Band, makes his songwriting and singing debut on Nine Lives with his composition “Deep Pockets.” Farrell is a key member of the San Francisco jazz scene, equally adept at performing and composing Brazilian, modern and big band jazz. Hansen and Farrell combine to produce one of the most exciting rhythm sections in the Nightcats' history.

The band's following albums, 1988's Disturbing The Peace, 1989's The Big Break!, 1991's Captured Live, 1992's Night Vision, 1995's Straight Up!, and 1998's Shadow Of The Blues solidified their reputation as one of the most adventurous and sophisticated blues bands around. 2002's That’s Big! continued their success, with reviews and features running in The Chicago Tribune, The New York Post, The Washington Post, The Houston Chronicle, GuitarOne, Guitar Player and many other national and regional publications. The band also was featured in a 20-minute interview and performance segment on National Public Radio's Weekend Edition.

With their CD Nine Lives and continued non-stop touring, the band, like their music, remains in constant motion, attracting new fans across the country and around the world. "The blues needs converts," noted The Village Voice, "and Little Charlie & The Nightcats make a few new believers every night." The Chicago Sun-Times declares, "It's tough for fans to stay in their seats when Estrin and Baty and their musical cohorts get cooking." Indeed, these cats jump, prowl and always come to play.