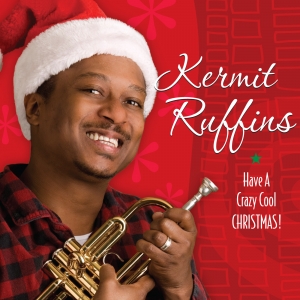 Make no mistake, everything about Kermit Ruffins exemplifies New Orleans. Residing in the town of Treme´, former home of his predecessors Louis Prima and Louis Armstrong, he continues the big brass tradition the town is known for – Kermit plays a “sweet, sweet horn”, as Michael J. Agovino of Newsweek notes. His musical stylings resemble the culture of New Orleans, a melting pot, with Jazz, funk, standards and hip-hop. His charisma, both onstage and on his recordings, reflects the spirit of his city. Kermit’s love for New Orleans is not just shown in his music. He gives back to his city not as if a necessity or chore, but as a way of life. And Kermit’s city embraces him the same way he embraces it.

Kermit Ruffins needs only two words to hype a New Orleans barroom for one of his weekly shows, and this, his newly adopted slogan, sums up what this Big Easy ambassador is all about.

If he isn’t busy playing himself in the HBO Series Treme, or barbecuing outside his bar Kermit’s Treme Mother-in-Law Lounge, or promoting the rights of New Orleans music venues, then the trumpeter/vocalist is undoubtedly on a stage doing what he does best—entertaining people and having a good time.
He personifies the laid-back vibe of New Orleans.

But he did not come by his gifts easily. Ruffins did his homework and developed his stage persona and musical act by studying artists who came before him. He watched video of Louis Armstrong and Cab Calloway until the tape wore out, busked the streets of the French Quarter, and apprenticed on stages with local legends “Uncle” Lionel Batiste and Danny Barker.

Consider his lengthy musical career. While still in high school, he co-founded the Rebirth Brass Band – a group that revolutionized the brass band community in New Orleans with songs like “Do Watcha Wanna” that have become anthems.

Rebirth’s growth and success bolstered the rejuvenation of the New Orleans second-line culture that now flourishes.

Still, after less than a decade fronting the band and touring the world, Ruffins tired of the road. He missed the culture at home so much that he traveled, like fellow New Orleans icon Fats Domino, with cooking equipment and prepared his favorite foods in hotel rooms far and wide.

He made a bold and risky decision to leave Rebirth and go solo, having no guarantees the public would embrace his new direction. At the time there were very few young musicians playing traditional jazz. Nearly all the backing musicians on his first album were decades older.

Now, Kermit Ruffins and the BBQ Swingers are a beloved institution – a must-see for every New Orleans visitor and a favorite of local critics and music lovers. As he’d helped spur the formation of new brass bands in his 20s, he’s since influenced the city’s musical direction in the 21st century. Dozens of young musicians and bands are essentially playing the same music Ruffins pioneered with his solo act. They sing into retro microphones, dress in dandy suits and perform the timeless tunes that defined a decades-past era.

Yet Ruffins has not been content to remain musically static. His live show has included elements of hip-hop since his days with Rebirth. He began rapping on albums long before it was commonplace for jazz musicians to have hip-hop influences.

It’s not the first time he’s taken musical chances. He had a short-lived progressive jazz band that experimented with arrangements of songs from the 1970s. His 2009 album, Livin’ A Tremé Life, included a version of Johnny Nash’s monster 1972 hit “I Can See Clearly Now.” It also had songs reflecting Ruffins’ deep roots in the R&B of the Crescent City, like Allen Toussaint’s “Holy Cow.”

In the ’90s, Ruffins fronted a big band with arrangements from great maestro Wardell Quezergue. He stocked the band with superior local musicians and the performances were on par with great bands of the ’40s, updated to reflect Ruffins’ effervescent personality. His 2010 release, Happy Talk, revisited that territory with a full horn section and sumptuous arrangements of tunes like “If I Only Had a Brain” (from The Wizard of Oz) and the Louis Armstrong hit “La Vie En Rose.”

With over fifteen albums to his credit including live albums capturing his inimitable stage presence (1998’s The Barbecue Swingers Live and 2005’s Live at Vaughan’s), the R&B and hip-hop oriented, Livin’ A Treme Life (2009), a collaboration with his Rebirth Brass Band brethren (2005’s Throwback), albums packed with big band arrangements like Swing This (1999) and Happy Talk (2010), a holiday album (Have A Crazy Cool Christmas [2009]), an homage to New Orleans’ traditional jazz (We Partyin’ Traditional Style! [2010]), and the party-anthem packed #imsoneworleans (2015) the New Orleans trumpeter shows no signs of slowing down.

Every year Ruffins ebullient attitude and love of his hometown music firms his reputation as the New Orleans idol. Dedicated to preserving and passing on the tradition of jazz, he is often compared to his own hero, Louis Armstrong.

On his likeness to “Satch” Kermit says, “That’s someone who really, really led one of America’s true art forms. He was really the cherry on top of New Orleans music. And now I see it being passed on to younger kids, and for me to have a role in that and to maybe do the things he did is so spiritual to me.”
Whether he’s slinging Bar-B-Q, adding to his collection of fedoras, or playing at one of his five regular weekly shows in New Orleans, Kermit Ruffins does it with joy and passion. It’s an attitude befitting of any true New Orleanian, and it can be summed up in two simple words: We Partyin’!
5
What's This
Advertisement