Kenny and Amanda Smith - With You 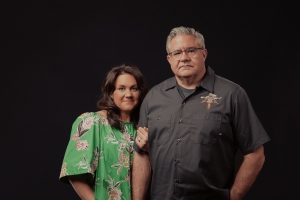 The award-winning duo of Kenny & Amanda Smith have cultivated a reputation of delivering fresh, heartfelt, bluegrass music to stages worldwide for nearly two decades. Known for sincere vocals and stellar musicianship, Kenny & Amanda Smith are one of the most beloved husband-and-wife teams in acoustic music.

Partners in both life and in music, Kenny and Amanda met at a bluegrass festival in the late nineties, while Kenny was performing with the legendary bluegrass group, The Lonesome River Band. Although a young man, Kenny already had a reputation as an ace guitarist, having twice been named Guitar Player of the Year by the International Bluegrass Music Association (IBMA). Amanda had grown up singing in churches and local talent competitions, and her star was quickly rising in the bluegrass community. The two forged a bond over their love for bluegrass music and their dedication to their Christian faith, creating a connection that resulted in lifetime love for the two of them, and beautiful music for the world.

Combining fresh bluegrass songs with Amanda Smith’s passionate singing and Kenny Smith’s inventive guitar work, has proved a winning combination among fans and critics alike. The husband and wife team released their debut album in 2001, and haven’t looked back. Kenny & Amanda Smith were quickly embraced by the bluegrass community, and were named Emerging Artist of the Year by the IBMA in 2003. Amanda Smith was named IBMA Female Vocalist of the Year in 2014, while the duo has received numerous nominations from the IBMA, SPBGMA and Dove awards throughout the years as well. Kenny’s reputation as one of the most influential flat-picking guitarists of his generation, makes him one of the most in-demand bluegrass guitar players in the industry.

Their knack for identifying hit songs has resulted in Kenny & Amanda Smith being mainstays on bluegrass radio for nearly twenty years. Their catalog includes “Winter’s Come and Gone,” “It’s Not The Wind,” “Randall Collins,” “I Know Where Love Lives,” “I’d Jump The Mississippi,” “Catch Me If I Try,” “You Know That I Would,” and many more hit songs that have filled bluegrass airwaves and charts for two decades.

Passion permeates everything that Kenny & Amanda Smith do, both in life and in music. On stage or in the studio, their love for each other comes across in their music, resulting in a rare chemistry that resonates with both longtime and first-time listeners. For nearly twenty years, their music has pulled on the heartstrings of fans of bluegrass and beyond, creating a lasting legacy that has made them one of the genre’s most beloved duos of the 21st century. While making music together is their passion, their proudest role is that of parents to their beautiful daughter, Annabelle.
25
What's This
Advertisement