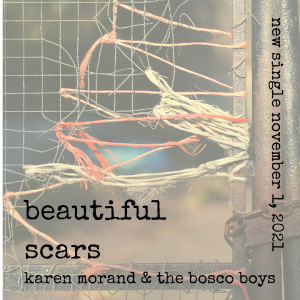 Karen Morand has roots that run deep. Born in Toronto and based in Southern Ontario, the award-winning singer-songwriter does life off the beaten path, sleeves rolled up with an eye on the eternal. Armed with feisty, powerhouse vocals, she delivers a soul-stirring show: lively, alt- folk with well-worn blues and gritty gospel on the side.

Karen radiates with energy in live performances both solo and accompanied by her acoustic trio, BOSCO. A graduate from the University of Windsor’s music therapy program, Karen enjoys making meaningful connections with her audience and inspiring hope. She is also a music educator, workshop instructor and music director.

Since her first studio release, 'Carry On' in 2012, followed by 'I Think I'll Lose My Mind Today' in 2014, and Junkyard Heart in 2016, Karen has maintained an intense performance schedule throughout Ontario and most recently, touring Eastern Canada. Her first solo and most recent release, “Every Flash of Light” (2018) is an EP produced by Danny Gauthier including co-writes with Nashville songwriters Steve Hindalong (the Choir), Kelly Kessler and Linda McRae (Spirit of the West). Other collaborations include her recent pairing with internationally renowned bluesman, Manitoba Hal Brolund as bluesy gospel Americana duo, “Even the Bird Was Free.”

What some folks are saying:

“I met Karen Morand at the Ontario Council of Folk Festivals in 2010 where I was a mentor. She was just beginning her career as a singer/songwriter and I was immediately impressed by her warmth and straightforward attitude. She has made great strides since then and has just released her second recording of her own material. Her songwriting belies the amount of time she’s actually been writing and I believe she is on her way to becoming an artist who will be a force on the Canadian music scene” Linda McRae, platinum award winning musician

"Karen Morand is something of a standout in the crowded field of solo singer-songwriters. Her performances and recordings both display a careful attention to craft as well as a broad range of influences. Karen’s material demonstrates her comfort with a variety of styles and genres and her ability to create appealing melodies and lyrics." Danny Sullivan, Artistic Director, Blue Skies Music Festival

“Songwriter Karen Morand casts power to stir the storm in your soul and part the dark clouds hovering over your heart. Karen drives the engine through songs that clang, grind and chug with bold defiance, shaken faith and cryptic warnings; breathing steam around embraces of the wounded and outcast.” Songstress and CJAM radio host Allison Brown

"Windsor based singer-songwriter Karen Morand writes wonderful warm earthy songs that speak to your heart and leave you begging to spend time in her company. Equally comfortable as a solo artist with a guitar or playing with her wonderful band "Bosco", her performances are definitely not to be missed."

“Karen Morand – My God, you can sing!!” Les Palango, station manager (“The Hawk”)
1
What's This
Advertisement