Karen Carroll - Had My Fun 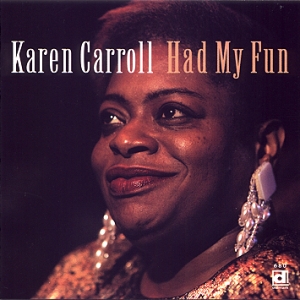 Blues singer Karen Carroll was seemingly destined for a career in music: not only was her mother Jeanne Carroll a blues and jazz vocalist as well, but her godparents were guitarist George Freeman and singer Bonnie Lee. Born in Chicago on January 30, 1958, Carroll started performing at the age of nine, joining her mother's band as a guitarist five years later; at 18 she struck out on her own, cutting her teeth in tiny South Side blues joints and developing a deep vocal style heavily influenced by jazz phrasing as well as the intensity of gospel. She made her recorded debut on Carey Bell's 1984 outing Son of a Gun, followed by the 1989 Eddie Lusk LP Professor Strut; Carroll made her solo debut with 1995's Had My Fun, returning two years later with Talk to the Hand.

Karen Carroll has plenty of opportunity to strut her stuff on her debut, Had My Fun. Unlike many contemporary blues albums, which are highly polished blasts of blues-rock, Had My Fun takes its time. Many of the songs are torchy slow blues or down and dirty Chicago blues -- either way, they sound natural, never forced. That's appropriate, since Carroll sings like a natural, caressing the ballads and growling the nastier numbers. Best of all, there's actual grit in the production -- four of the songs were recorded live -- and that allows Carroll to achieve her full potential on this impressive debut.