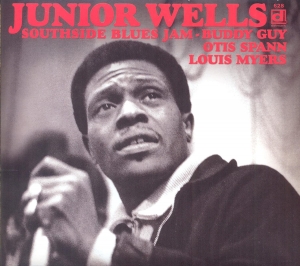 We have tried to capture on this album what a listener would hear any monday night at Theresa’s Blues Bar (now defunct) at 48th and Indiana on Chicago’s Southside. The blue Monday regulars, includng Buddy Guy are joined by the late Otis Spann, the greatest blues pianist of his generation, making his last studio appearance and to whom this album is respectfully dedicated by Junior, the musicians, and…the Delmark staff.

all songs by Amos Blakemore, aka Junior Wells except noted

On tracks 1 & 3 Louis is on the left channel, Buddy is on the right.

Hoodoo Man Blues (612) was the first LP recording of modern Chicago blues by a working band. Sam Charters said he did the Chicago blues Vanguard anthology of three volumes because of that classic album. This resulted in Junior's contract to Vanguard and Mercury, so we couldn't record Junior again for three year. Junior called me to say he was free to do another record before signing with Atlantic.

On this second record, I think we again captured what a listener might hear at Theresa's Lounge (4815 S. Indiana). When issued in 1970 many reviewers thought it was a gathering of musicians who didn't often work together even though this was Junior's regular band.

I was pleasantly surprised when the first guy who showed up at the studio was Otis Spann whom Junior had run into the night before and invited him to the session. This turned out to be Otis's last record date and I’m glad we recorded a trio piece while waiting for the rest of the band to arrive. It’s on Blues Piano Orgy (626).
We owe thanks to Theresa Needham's massive contribution to the blues for paying decent wages to the artists that played her club and putting up with occasional lapses. She worked fourteen to sixteen hours a day. I remember one night, for some reason, I had bugged a patron. When we left, Theresa, Junior, Buddy and a bunch of others made sure we got to our car all right. I always felt secure in the south and west side clubs because the owners didn't want anything to happen that might jeopardize their license. I felt even more secure at T's.

Carl Jones may be an unfamiliar name, but was a colorful character. He was a standup singer who had recorded for Mercury in 1945 accompanied by a Richard M. Jones group of ‘20s-era musicians and Lonnie Johnson (who sang one line). One of his tunes on that date referred to "Indiana & 49th" - one block from where Theresa's was twenty years later. CJ was the bartender at T's but he was also issuing blues 45s (including Hound Dog Taylor's first record) on his CJ label. Sadly, his master tapes disappeared when he passed away, apparently stolen from his apartment above T's club.
There seemed to be two kinds of blues in Chicago: the mellow Mississippi-born Muddy-Wolf-Junior kind, which we called south side style. And then the stinging west side sounds of Magic Sam, Luther Allison, and Buddy Guy.
You get my point? Junior was able to blend his stuff with Buddy's.

The Southside Blues Jam sessions present Junior's knack for making up lyrics during a performance, notable on the second and sixth tracks (from the original LP release) and the eleventh and last tracks on this expanded CD. I don't think anyone ever caught Junior doing the non-verbal vocals as heard on track 9 and 17.

Shortly after the album's release, Junior toured Europe with the Rolling Stones. Thanks to Dick Waterman, Junior and Buddy spent a lot of time making better money on the road. (Dick entered the blues booking business after discovering Son House - and only left it when his secretary, Bonnie Raitt needed a fulltime manager.)

Everybody knows Otis Spann was Muddy Waters' greatest pianist but I should mention that guitarist Louis Myers was, with Fred Below, a member of The Aces, Little Walter's accompanists. They also appeared on Junior's first records for the States label (now available on Blues Hit Big Town (640)

Junior had a way of making his singing confidential, somehow sounding as if he were only singing to you.

On tracks 1 & 3 Louis is on the left channel, Buddy is on the right.
26
What's This
Advertisement