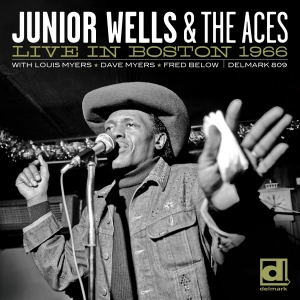 The sheer power of Junior Wells' personality comes through on every track, and on the entertaining between-songs patter included here as well, which provides a valuable insight into just how dynamic and personable a performer he was in his prime. Junior Wells was a little guy, but his outsize persona loomed large over the Chicago blues landscape during his time, and continues to cast a shadow today. Be
thankful to the blues gods that this important, valuable, and most importantly, enormously entertaining document of one of the key figures in Chicago blues history survived and is available for us to enjoy right now. Complete notes by Scott Dirks enclosed.


In 1966, Junior Wells was at something of a turning point. He'd begun his
professional music career fifteen or so years earlier, and enjoyed some
early attention as a member of Muddy Waters' prestigious band, then via his
own recordings for the States label - both endeavors now counted among the
highpoints of the classic Chicago blues era. As the '50s waned and the '60s
dawned, he'd rolled with the musical punches, and adapted his style to the
more pop and soul-oriented sounds then emanating from the black Chicago
music scene. In 1965, he recorded the groundbreaking Delmark album Hoodoo
Man Blues with help from a young Buddy Guy, and began crossing over to
younger, whiter audience with his mixture of deep blues feeling and
contemporary funkiness. Behind him, a legacy of classic blues rooted
equally in the southern traditions of Junior Parker, Sonny Boy Williamson
II, and the gritty urban sounds of Muddy Waters, Little Walter and others.
In front of him was a doorway into funk, soul, and slick horn-laden R&B,
already ajar and just waiting for him to push through.

So when he went to play Boston in September of 1966, it would have been
completely natural for him to bring along some of his regular working
Chicago crew, which at the time might have included Buddy Guy, bassist Jack
Myers, and drummer Bill Warren among the flexible lineup. Instead, Junior
reached back instead of looking forward, and brought along the band that
he'd begun his career with c. 1950, The Aces - brothers Dave and Louis
Myers, and drummer Fred Below. This was the band that had shaken things up
as young men in Chicago back in the early '50s, adding an undeniable swing
to the downhome blues of their elders. It was with Junior up front that
they'd first become a force to be reckoned with; it was the fact that they
were already pushing the blues envelope and bringing the music to a younger,
hipper audience that inspired Little Walter to hire them intact as his first
band (and send Junior to Muddy) in 1952. In an interview many years later,
when asked to name his favorites from among all the many musicians he'd
worked with over the years, he replied "The Aces" - not a cherry-picked list
of all-time MVPs filling each position, but instead the single group that
had defined the blues ensemble style that Junior had cut his teeth on at the
beginning of his career.

This Boston show shows Junior well into his comfort zone, obviously feeling
good, bantering with the audience, joking and clowning, but not neglecting
to get down to some serious blues as well. He's at ease enough with The
Aces to go off into some obviously improvised, spur of the moment
excursions, ad-libbing lyrics and themes, riding the groove and going with
the musical flow as he puts on a show that may have been a little different
from his typical south side club dates (listen to his more serious and
sedate live recordings at Pepper's Lounge in Chicago from the "It's My Life
Baby" LP from the following year for contrast). His performance here is
extroverted and playful, and in some ways more intense, as he digs into his
early influences as well as more recent developments on the blues scene.

As the set progresses, Junior becomes more adventurous, and veers away from
familiar territory into spur-of-the moment areas; especially notable are a
few tracks that seem to be improvised on the spot. "Junior's Whoop" starts
like an homage to Little Walter's "Mellow Down Easy", but evolves into a
rocking vehicle for wonderful extended solos from Junior and guitarist Louis
Myers. "If You Gonna Leave Me" and "I Don't Know" sound like they're both
assembled on the spot from spare parts Junior had left over or
half-remembered from other songs, and it's a credit to his amazing skills as
a performer and the force of his personality that he makes them both sound
fresh and complete. It's this same charisma that breathes life and
excitement into even the most familiar titles - which certainly weren't as
well known outside Junior's milieu as they are now.

Hearing these live recordings, it's hard to believe Junior has been gone
going on fifteen years now. The sheer power of his personality comes
through on every track, and on the entertaining between-songs patter
included here as well, which provides a valuable insight into just how
dynamic and personable a performer he was in his prime. Junior Wells was a
little guy, but his outsize persona loomed large over the Chicago blues
landscape during his time, and continues to cast a shadow today. Be
thankful to the blues gods that this important, valuable, and most
importantly, enormously entertaining document of one of the key figures in
Chicago blues history survived and is available for us to enjoy right now.
-Scott Dirks, August 2010


Feisty, full of street swagger, humor, and sweat, Live in Boston 1966 provides a side of Junior Wells' stage persona that few, if any, of his other albums revealed. This previously unreleased date features Wells with the Aces; the crack bar band that he began his solo recording career with in the early '50s for the States imprint. The Aces -- guitarist Louis Myers, bassist Dave Myers, and drummer Fred Below -- were playing juke joints and bars on the South and West sides of Chicago, their early, deserved reputation as one of Chicago's hardest swinging blues bands had, by the '60s, been all but eclipsed by Buddy Guy and Magic Sam. This gig is as enjoyable a listening experience as it is an historical artifact, following as it does the previous year's classic Hoodoo Man Blues. Wells and the Aces are playing from the heart: they reach back to the gritty electric blues of the old-school Chicago ensemble sound -- the postwar years -- and they flaunt their panache with the funkier R&B grooves that the West Side blazed trails with in the early '6os, and they look to the future with the nastier, more improvisational electric blues that would come later in the decade. How many blues recordings can you hear where the artist's stage banter is as fresh on the tenth listen as it was on the first? Even more importantly, one on which the banter is as enjoyable as the music itself? Wells raps plenty here. The album begins with the opener "Feelin' Good," and extends from between-song banter where he engages the audience, to his improvised originals such as the killer "Junior's Whoop," "I Don't Know," and "If You Gonna Leave Me." The way he and the Aces work together is seamless and instinctual; Wells can take chances with his lyrics and his harp phrasing because the band is on a roll; they are part and parcel of the groove; they push Wells further in a friendly, competitive way. The band just shines. The standards here are completely reinvented. Dig the readings of standards such as "Man Downstairs," "That's All Right," "Look on Yonder's Wall," and "Mojo Workin'," they're uptempo, full of raucous exuberance and soul, while the reading of Sleepy John Estes "Worried Life Blues" is lowdown sad as the crying blues get. The sound on here is gritty, but very present. Live in Boston 1966 is the great blues surprise of 2010.
Review by Thom Jurek
27
What's This
Advertisement