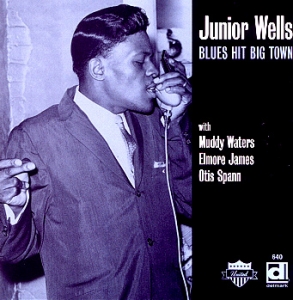 These historic sessions also feature Louis and Dave Myers, Willie Dixon, Johnnie Jones, Fred Below and Odie Payne Jr. Recorded by United Records in '53 & '54 at Universal Studio in Chicago, eight sides were issued on the subsidiary States label. Delmark's original LP contained twelve performances and now 5 more are added for the CD! Junior's debut recordings as leader include his first recording of Hoodoo Man Blues. He was still a teenager at the time and had replaced Little Walter in the Muddy Waters band. Down Beat's Pete Welding wrote about their power, directness, unerring taste and utter consistency of mood, these may well be the most perfectly distilled examples of Wells' music ever recorded, taking their place alongside of those of Waters, Walter, Wolf and other masters of the period. Five stars. Blues Hit Big Town captures genius emerging from one of the greatest blues personalities and harmonica players of all time. Part of our United series.

United Records was the first successful black- owned record company. Operated by Leonard Allen, tailor, retired policeman, and obviously one of exceptionally wide taste in music, the two labels (United and States) issued some of the best performances in the jazz, blues, gospel, R&B idioms. Equally import- ant are the unissued performances--United issued only a third of their masters because today's LP audience did not then exist. Del- mark is proud to release this important body of masters recorded by studios which pioneered hi-fi recording in the 50h.


"Please Throw This Poor Dog A Bone" and "Can't Find My Baby" were recorded as an audition tape sometime between the two sessions, probably in early '54, and feature Junior with Louis Myers.