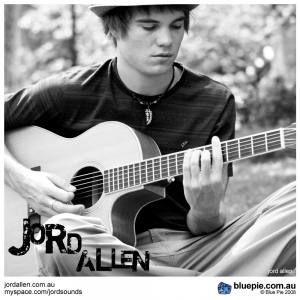 Australian Pop/rock sensation Jord Allen grew up living in an ever-growing small country town. Jord was to explore inside and outside of his comfort zone, which would eventually show him the ups and downs of love, life and music. This also gave him the inspiration to write his very first songs and then mature into a modest young singer/songwriter who now has everything going for him; good looks, talent and a great attitude for his love of music.

Jord picked up the guitar at a very young age of 2 and was known for his rendition of “Waltzing Matilda!” Later Jord’s Dad let him “Borrow not Have!” his acoustic guitar, which encouraged his musical career, it was not long after that friends, family and audiences knew that Jord had what it takes to be a star!

The love of the Australian bush, Ocean Grove – his favorite holiday destination, and taking his first step in traveling overseas would influence him into writing his first EP ‘Get Happy’ with an innocent Rootsy/Folk style. The four tracks are songs depicting tales of fun times, being away from home and working out those puzzling teenage questions life throws at you.

Jord turned back to his “Old School!” influences, his first cassette tape of James Blundell, James Reyne and his first Cat Stevens music book. He is now playing his new songs while supporting and performing with legends like the Brewster Brothers (John & Rick Brewster from The Angels), Russell Morris, James Reyne, and The Black Sorrows, to name a few.

After having surgery to remove a cyst from his vocal cords Jord has now evolved to find his ‘new sound’ and has started work on an album which will be released later this year. He now has a mature rock/pop edge to his new material with his new band including Josh De Araugo on drums, Jacob McGuffie on bass/guitar and Jack Michael on keys, it is guaranteed to be a killer album. Look out for the new single being released in June go to: www.jordmusic.com.au for more info.

“Jords good looks, great personality, ability to hold an audience and song style makes him the ideal entertainer for any venue. I strongly suggest for all venue operators to engage his services – this guy works!"

“Mix the Hurdy Gurdy man, a splash of Dylan and a dash of the Tamborine Man and you have Jord - 60’s Folk Rock at it’s best”

Jord is available to all radio & media at the following digital media outlet:
www.airplaydirect.com/JordAllen


Get Happy! OUT NOW! At good digital & regular retailers everywhere.