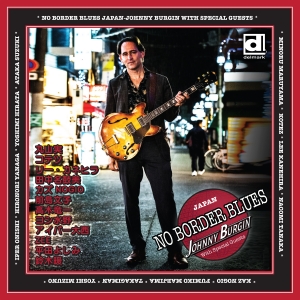 
No Border Blues is a result of cherry picking just some of my favorite players from several tours in Japan over a twenty year period. I also included a representative of an elite group of Japanese blues players who immigrated to Chicago and by hard work, talent and persistence, earned their way into some of Chicago’s top blues bands. In ‘96 I first went to Japan with my college friend and Tail Dragger bandmate Ken Kawashima. It was a humble tour of Tokyo, Fukushima and Osaka. In those pre-internet days, Osamu Sato, owner of Sam’s Record Shop in the Shibuya district of Tokyo, played a key role in publicizing our gigs. The trip was eye-opening; when I witnessed Kozy Ouchi, a Japanese musician who modeled himself completely after Lightnin’ Hopkins”, casting a spell on a rapt audience, I realized just how intense and dedicated both the Japanese players and audiences were. I met several remarkable players who I still work with today including harpman and singer Kotez, who was already a great showman and player while still in his early 20s. Kotez burns through “I Just Keep Loving Her” and the original “Samurai Harp Attack”. While touring in Oaska I also met and worked withTakagiman. One of my favorite drummers anywhere, Takagiman plays on several cuts here. In 2013 I met a bassist Yoshimi Hirata (her biggest hero was Dave Myers), so I hired her a lot that summer. She was thrilled to play paying gigs in Chicago and later that winter, she returned the favor by booking me a two week tour in 2014. On this trip I played with many of the players who are on NBB such as pianist Lee Kanehira, Kyoto harpman Kazu Ohnogi, and Osaka’s Yoshi Mizuna, who displays that slashing west side sound on “One Day”. One of Yoshimi’s biggest responsibilities was figuring out how to include all the Japanese players on the shows. She worked through local contacts in other cities so everyone shared the organizational work. It seemed like once the basic will to realize a tour was agreed upon, the tour just came together in a matter of days. That clued me in to the communal, non-competitive, and inclusive nature of the Japanese blues scene. In 2018 I first went to Japan with my partner Stephanie Tice. We met Nacomi, an original front woman and tireless performer whose band is a joy to work with, and the striking harp player Iper. Throughout my time in Japan, I was struck by the selflessness and discipline that so many Japanese musicians dis- played. The artists on No Border Blues don’t worry about being nominated for awards, because there aren’t any. They don’t compete for gigs, because practically nobody plays music for a living. I hope that their spirit, attitude towards their craft, and soul will refresh, intrigue and impress you as much as it has me over the years, and that the rest of the world will come to know some of the hidden treasures of Japan’s underground blues scene. - Johnny Burgin

Johnny Burgin earns his name as The Worldwide West Side Guitar Man by performing up to 250 shows a year in Europe, Japan and coast to coast in the US. Johnny started his career in the rough and tumble neighborhood blues joints on Chicago’s West Side with Howlin’ Wolf disciple Tail Dragger, and went on to tour and record with blues legends such as Pinetop Perkins, Sam Lay and Billy Boy Arnold. He’s been praised by the Cascade Blues Association for his “stunning guitar playing– the pure Chicago styled sound”, and his fans love Johnny’s take on the intense, stripped-down “West Side sound” of Otis Rush, Magic Sam and Buddy Guy. Johnny is a Delmark and Vizztone recording artist with 8 CDs to his credit. He was nominated for a BMA for Best Traditional Blues CD of 2017 for “Howlin’ at Greaseland”, a Howlin’ Wolf tribute.

Johnny Burgin grew up in Starkville MS and Greenville SC, and while he was still in high school, he got to see many touring blues bands such as Guitar Jr, Gatemouth Brown and Eddie Clearwater. His father was an actor and folk musician and taught him the basics on guitar. He went to University of Chicago with the intention of becoming a writer, but a different path unfolded and he fell headfirst into the Chicago blues scene. Things started happening fast after Johnny (at that time featuring guest vocalist Jimmy Burns) took a Monday night residency at the Smoke Daddy in Chicago’s Wicker Park neighborhood. They soon became a strong draw, and the atmosphere they generated was so electric that Bob Koester of Delmark Records offered them a contract after hearing just one set.

Since those days, Johnny played the Chicago blues festival many times, toured Europe regularly, and has headlined festivals all over the US. Over the years, he has developed from a blues guitar slinger and local blues hero into a fully fledged singer, harmonica player, a dynamic and engaging bandleader, and a mature, seasoned guitarist. One look at Johnny’s tour schedule confirms his status as an in-demand blues performer. Rockin Johnny also plays solo and duo performances and does guitar and blues workshops worldwide. He puts on the kind of satisfying and exciting show that only years of touring can develop. Elmore magazine remarked on Johnny’s “commanding vocals and stinging guitar”, but Elvin Bishop may have said it best: “his guitar style is raw and rude and real—on the vocal side, a nice original style–he’s damn good!”