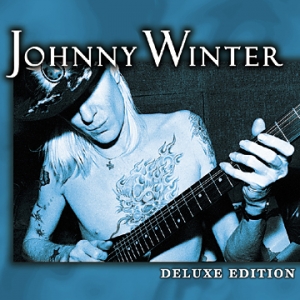 Johnny's storied career began when he was fourteen years old. He and keyboard-wizard brother Edgar formed Johnny and the Jammers in their home town of Beaumont, Texas. With their supercharged blues-rock, Johnny and the Jammers became a local phenomenon, winning talent shows and eventually landing a recording contract with the Dart label. Their first single, "Schoolboy Blues," was released when Johnny was only fifteen. With the exception of a brief stint in Chicago in the early '60s, Johnny was a regular in the Houston and Beaumont recording studios, cutting dozens of tunes as both a leader and sideman. When he wasn't in the studio, he was playing club gigs or sitting in with touring blues artists like B. B. King and Bobby "Blue" Bland and earning a word-of-mouth reputation on the "chitlin' circuit."

Johnny cut four classic albums with Columbia, including the essential hard rock landmark, Johnny Winter And Live, his best-selling album ever. In 1974 he began a relationship with Blue Sky, a CBS-distributed label founded by manager Steve Paul. Not only did Johnny release four solo albums for Blue Sky, but he was also afforded the opportunity to produce several Muddy Waters albums. Two of those albums, Hard Again and the following Muddy LP, I'm Ready, won Grammy Awards. "Working with Muddy made me feel people were finally realizing that I'm not faking, and can really play blues," Johnny says. ''I felt I'd established myself."

After a four-year recording hiatus, Johnny joined the Alligator Records family in 1984. His desire to record nothing but authentic blues made for a perfect fit. When Johnny released [b[Guitar Slinger later that year, it was widely hailed as his best (and bluesiest) album ever; it charted in both Billboard and Cashbox as well as earning a Grammy nomination. The next year, Johnny followed up Guitar Slinger with Serious Business. The powerhouse album won Johnny his second Grammy nomination with Alligator Records. Third Degree, his final Alligator release, came out in 1986. The album featured several special guests and an array of blues styles. Original blues cohorts, Tommy Shannon and Uncle John "Red" Turner, as well as Mac "Dr. John" Rebennack, all made guest appearances. Johnny also played two solo acoustic cuts on the National Steel guitar (the first time he'd played the National in the studio since 1977).

Johnny was living his artistic dream, recording nothing but pure blues. Surprisingly, his Alligator albums earned their way onto rock radio and a video for the song "Don't Take Advantage of Me" played on the fledgling MTV network for over six months. But no matter how much commercial success Johnny's Alligator albums received, they never compromised his commitment to his roots. Johnny had returned to the blues.