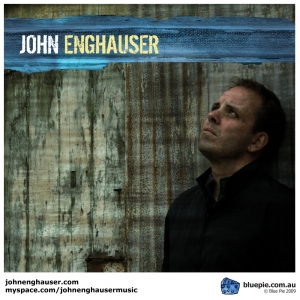 
Singer/Songwriter, John Enghauser, has been on the original music scene since the mid 90’s. Beginning with his band Jamawokee, a high octane 4-piece funk rock project which debuted in Massachusetts, John began honing his song writing and frontman skills. The band released its first recording self-titled “Jamawokee” in 1996.

In the late 90’s, John fronted his own original group, Jeng, where he wrote all of the material and whose potent live show piqued the interest of record labels such as Columbia and Virgin Records. John released his second album “Larium Dream” which was a compilation of Jeng songs he’d written during his time with the band. It was around this time that John also served as Music Director and contributing songwriter on the indie films “Urban Relics” and “When it Rains”. The “Urban Relics” Soundtrack would mark John’s 3rd official release to date.

In 2000, Enghauser ventured westward where he landed in California. After several musical stints in San Francisco and Los Angeles, John has settled in the bay area where he’s just completed his long anticipated fourth release “Lost In The Pages”. In addition to all vocals, John performs guitar, bass and keyboards on the CD.

Currently, John’s new band is performing and promoting “Lost in the Pages” live while the CD is being played in 13 countries worldwide including England, Australia, Germany, France, New Zealand, Canada and The U.S.A. “Lost in the Pages” has already received critical acclaim by being nominated by LA Music Awards as “Best Album of 2009″ in two categories.